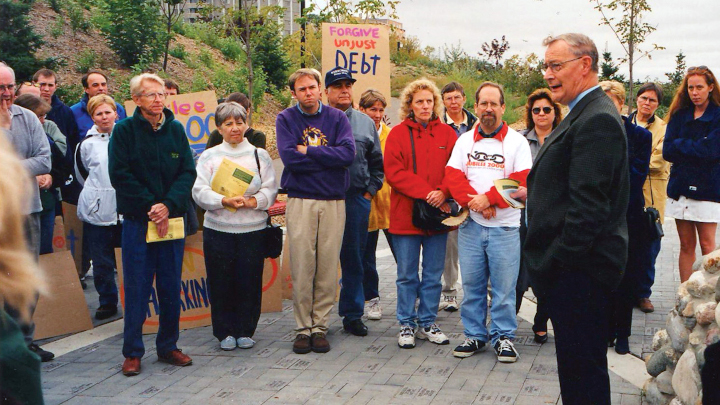 Development and Peace members leading a debt cancellation rally in Saskatoon, Sask. in 1999.

Development and Peace — Caritas Canada has endorsed a call to suspend and cancel low-income countries’ debts as a means of tackling the COVID-19 pandemic, which has become both a global health crisis and a global economic crisis.

Inspired by the ancient concept of the Jubilee, a time when debts were cancelled, slaves were freed and land and wealth were redistributed, this call, issued by the UK-based Jubilee Debt Campaign, asks for the suspension of debt payments in 2020 and the cancellation of the sovereign debts of the poorest countries in the world. Led by a broad cross-section of over 200 ecumenical and lay organizations and 750,000 people around the world, this initiative has already had some success.

The G7, and then the G20, as well as the International Monetary Fund (IMF) have agreed to suspend over $12 billion USD in debt payments from the world’s poorest countries this year. The IMF has also cancelled debt payments worth US$215 million. This applies to many countries where Development and Peace works, including Haiti, Afghanistan and the Democratic Republic of the Congo.

While these initial multilateral steps will help a lot, more needs to be done. The Jubilee Debt Campaign estimates that low- and middle-income countries will need the cancellation of debts of up to US$300 billion to help fight coronavirus over the next year. Such a mass debt write-off would keep scarce resources where they are most needed.

The rationale of the debt suspension initiative is that as COVID-19 begins spreading in the Global South, the poorest countries should be able to pay for their citizens’ medical care rather than having to pay their lenders. The massive scale of the pandemic means that the poorest countries will be in severe crisis, given their extremely weak health systems and their paucity of doctors, nurses, other health professionals and healthcare facilities.

Debt suspension and, even more significantly, debt cancellation, can leave countries with more financial resources to treat their coronavirus-affected citizens and stem the tide of global transmission. Without debt relief, COVID-19 would infect and kill more vulnerable people, making the pandemic more difficult to control and exacerbating its already devastating economic impact, including for lender countries.

This is not the first time that Development and Peace has joined a jubilee debt initiative. In anticipation of the millennium in 1999, we supported the first global call for debt cancellation as a member of the Canadian Ecumenical Jubilee Initiative. More than 24 million signatures collected worldwide were presented to the G7 Summit in May 2000. At that time, it was stated that the new millennium should be a time to give new hope to the world’s impoverished people, who were burdened with unpayable debt. Showing extraordinary humanitarian leadership, Canada had placed a moratorium on collecting select debts, leading to the eventual cancellation by Canada of over C$1 billion of debts owed by 15 low-income countries.

The current COVID-19 pandemic is also a moment to do everything possible to support the most vulnerable people in the world. Suspending debt payments is a first step, but world leaders must go further and agree to debt cancellations. We hope that Canada will once again take the lead in making this happen.