“The issues that you raise around forced migration… are very important. I am so inspired by the fact that you’re involved at a young age in these issues,” said the Hon. Ahmed Hussen, Canada’s Minister of Immigration, Refugees and Citizenship, to a delegation of Greater Toronto Area and Ottawa-region Catholic school students on Parliament Hill on Wednesday, May 15, 2019.

Explaining why the issue of forced migration, despite its apparent remoteness, moved her peers to act, Ohanna Kang, 12, said, “It’s not fair that we get to sit around while others are suffering. We need to reach out and make people aware of what’s happening in the world.”

Kang and her friends were in Ottawa to attend a luncheon hosted by the Hon. Francesco Sorbara, Member of Parliament for Vaughan — Woodbridge. They delivered a total of over 10,000 postcards signed by their peers and addressed to the Prime Minister of Canada to their respective MPs.

These messages call on the federal government to uphold the Canadian values of openness and compassion; to increase funding for humanitarian assistance to refugees; and to address the root causes of the global migration crisis. Since last fall, hundreds of students aged 12 to 17 years, have been educating their communities on the plight of the world’s 68.5 million people who are forced to flee wars, persecution, natural disasters and acute environmental degradation. 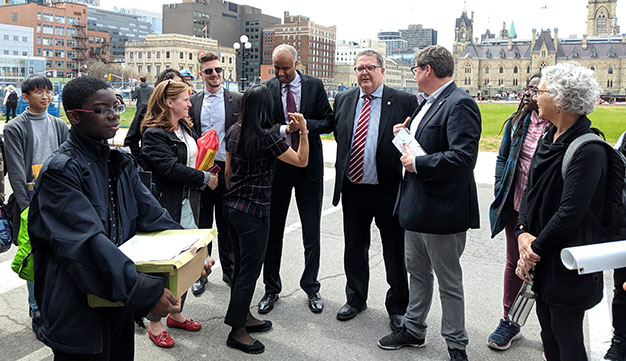 Their effort was part of the “Share the Journey” campaign that Pope Francis launched in 2017 in solidarity with the world’s forced migrants, and that is run here in Canada by Development and Peace.

Sharing her own family’s immigration story, the Hon. Bardish Chagger, Canada’s first female Leader of the Government in the House of Commons, told the students, “My parents came here from India. And never did I imagine that a girl like me could put her name on a ballot, be elected and then actually be chosen to be part of Cabinet.” On the students’ call for positive change, she said, “Democracy is the power of the people. If you demand it in a respectful way and bring people outside with you, it can happen!”

After being welcomed by Hussen and Chagger, the delegation proceeded to enter the East Block, where Sorbara had laid on a generous lunch buffet. The students and their teachers met and shared their concerns and hopes with several MPs including Michael Levitt, Arif Virani, Kyle Peterson, Mark Holland, Ruby Dhalla, Raj Saini and Jennifer O’Connell, all of whom offered support and encouragement and expressed thanks. 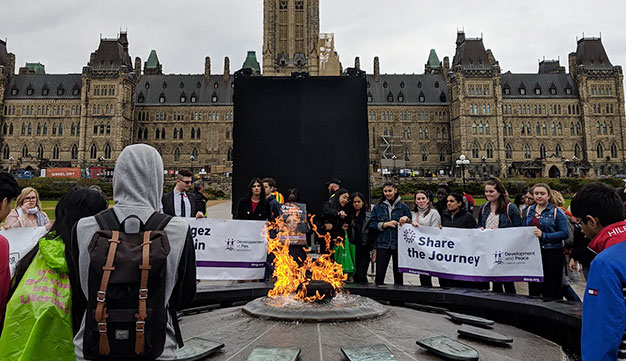 At 3:00 p.m., the students gathered around the Centennial Flame for a prayer circle. Luke Stocking, Deputy Director of Development and Peace’s animation team for Atlantic and Central Canada, averred that Jesus Christ himself was a refugee. “We remember that God walks with those who are forced from their homes,” he said, underlining the moral imperative of solidarity with forced migrants.

Stocking then gifted a Development and Peace 50th anniversary t-shirt to Sorbara as a token of the organization’s thanks for his untiring support and unstinting hospitality.

Finally, to drumbeats and chants of solidarity and peace, the delegation circled the Parliament lawns. This “Share the Journey” march was a small celebration of the attainment of a key campaign objective — walking 40,075 kilometres (equal to the circumference of the earth) to symbolically replicate the arduous journeys that many migrants make on foot. 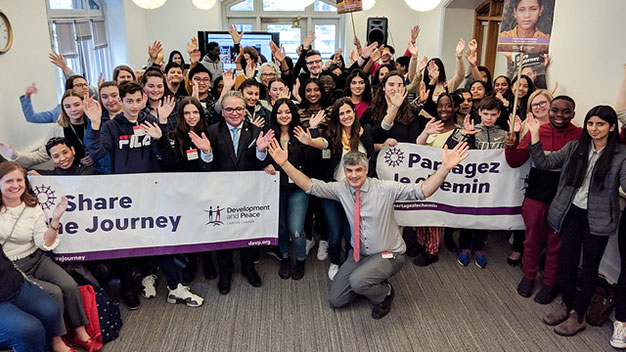