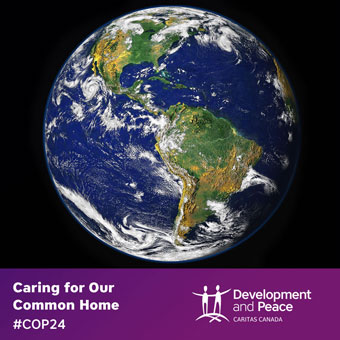 This week, negotiators from 197 countries have come together in Poland for U.N. climate talks at COP24, which may be the world’s last chance to ensure that we respond to the global climate crisis. There are two key goals for these talks: to keep global warming below 1.5 degrees celsius, and to establish robust rules that will encourage all countries to do their fair share. This is an ambitious goal, but to prevent the worst impacts of climate change, we all need to be ambitious.

The most recent Special Report of the Intergovernmental Panel on Climate Change (IPCC) on 1.5°C said it loud and clear: there is no time to waste in reducing greenhouse gas emissions globally if we want to continue to live on this planet as we know it. The report also makes the important point that we can succeed if we all contribute, and if vulnerable communities receive the resources they need to adapt.

Catholic organizations and networks around the world have been at the forefront of calling for ambitious action. From the Global Catholic Climate Movement to the Continental Bishops’ Conferences to the Holy See, Catholics are calling for respect for human dignity and care for creation. Serge Langlois, Executive Director of Development and Peace, joined other CIDSE organizations in a statement calling for climate justice in response to CIDSE’s report called “The Climate Urgency: Setting Sail for a New Paradigm,” which explores how a deep and rapid shift in our food and energy systems, supported by structural lifestyle and societal changes, could greatly contribute to limiting the rise in average global temperatures to 1.5°C.

Here in Canada, our federal government will have to be courageous and show leadership at COP24. With more and more world leaders putting profit before the preserving the planet for future generations, countries like Canada must not only fulfill their commitments, but need to scale up in order to achieve the transformational change that is required. With various provinces pulling out of the federal carbon tax program, our country is torn between a desire for expansion of our fossil fuel industry and an environment that can sustain us. A just transition is the way to achieve this compromise that invests in a sustainable economy and a sustainable environment.

Inspired by Pope Francis’ encyclical Laudato Si’, Development and Peace led the national campaign “Create a Climate of Change,” which showed that Canadians are ready to reduce their consumption in order to create the transformational change required to save our common home. Since the poorest people in the Global South are the least to blame for climate change, yet are hit the hardest, Canadians across the country made a commitment to prevent the worst impacts of climate change. From the way we eat to our means of transportation, we committed to changing the way we do things in in order to reduce climate change, and we called on our federal, provincial and municipal governments to do the same.

The following year, Development and Peace continued to put climate change front and centre. The 2016 campaign called on Canada to support small family farmers in the Global South who are severely affected by climate change through policies and financing that support them in their struggle against climate change and hunger.

Ambitious financing for climate adaption and mitigation in developing countries will ensure that the 2015 Paris Agreement will be effective for everybody. Developed countries like Canada, who are among the highest greenhouse gas emitters in the world, cannot delay any longer and must make strong commitments towards the vulnerable communities who are most affected by the droughts, super typhoons and floods caused by climate change. The world’s richest countries have promised to mobilize $100 billion a year in climate financing by 2020. So far, according to a new U.N. report, public and private finance from rich countries only came to $70 billion in 2016.

To contribute to your own reflection on confronting the challenges of climate change, particularly for our sisters and brothers in the Global South who are suffering the most from the effects of climate change, visit our Laudato Si’ resources page: https://www.devp.org/en/encyclical.

You may also wish to join GCCM in praying for Our Common Home: A Prayer for COP24