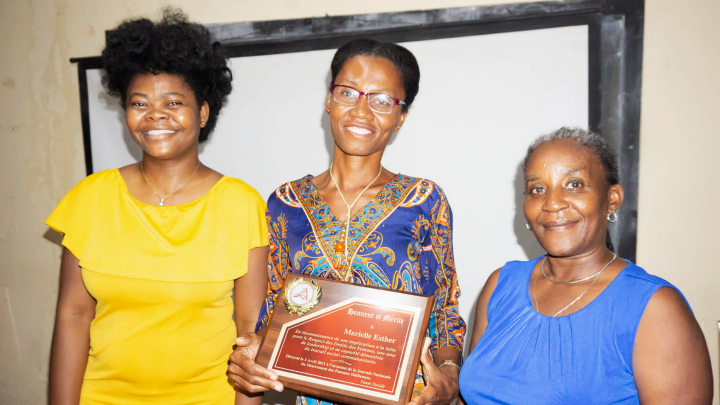 Marielle Esther (centre) is one of the 10 “focal point” women who represent Fanm Deside in Haiti’s Sud-Est Department.

The National Day of the Haitian Women’s Movement, observed on April 3, is an important occasion for Development and Peace — Caritas Canada’s partner, Fanm Deside, whose mission is to “work for change in the status of Haitian women.”

Given the ongoing political violence and the current precarity of democracy, Fanm Deside organised this year’s observance of the day under the theme Women Standing for the Right to Life and the 1987 Constitution1. Activities conducted in collaboration with other women’s organisations included debates, interviews, radio broadcasts and screenings of documentaries such as Les Enfants du Coup d’État.

As part of the celebrations, Fanm Deside awarded a congratulatory plaque to Marielle Esther in appreciation of her services to the women’s movement. Esther serves as the “focal point” for Fanm Deside’s programming in the Bainet commune in Haiti’s Sud-Est Department.

The 39-year-old mother of three was a precocious rebel. Speaking on Fanm Deside’s Action Féministe radio show, she said, “I was born a feminist. From a very early age, I had a different view of the reality of my country, of the education and values that were passed on to me. I was opposed to anything that was housework or any other tasks typically assigned to girls.”

Esther’s parents had enrolled her in a faraway school, hoping that a daily 40-kilometre bicycle commute would leave her no time for “non-traditional pursuits.” That strategy proved ineffectual. Esther makes a rather non-traditional living as a technician in the male-dominated fields of masonry, tiling, carpentry, plumbing and coffin-making.

Along with some encouragement and praise, Esther has encountered much gender discrimination, which, she characterized as a burden she has borne since childhood. Undeterred, she said, “I followed my path and eventually succeeded beyond taboos and discrimination.”

Esther is one of 10 “focal point” women who represent Fanm Deside in communes that are often quite distant from its head office in the Sud-Est departmental capital of Jacmel.

Thanks in part to funding from Quebec’s Ministry of International Relations and the Francophonie, these women are trained to identify, accompany and provide social and paralegal support to victims of gender-based violence. They also raise awareness on women’s rights, propose mediations in situations of family conflicts and conduct public education on COVID-19 and sanitary measures.

Explaining the focus on women, Development and Peace’s Latin America programs officer, Mary Durran, said, “In Haiti, working with women is a priority for us. Poor women are more marginalized and excluded than Haitian men. As well as poverty, they suffer gender-based violence. Our strategy is to empower women to take action to improve their situation, and to educate Haitian society on the situation of women and how to improve respect for their rights.”

1) The 1987 Constitution, drawn up after the fall of the Duvalier dynasty in 1986, sought to end the dictatorial practices of the past and to turn a new page for democracy and human rights.