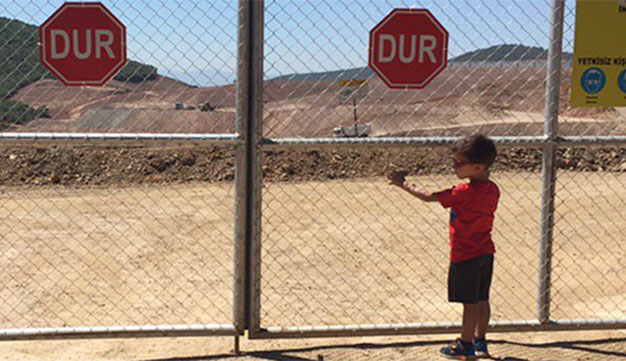 In Greek mythology, the gods are said to have watched the Trojan War unfold from atop Mount Ida in northwestern Turkey. Today, the mountain is again acquiring fame as the site of an epic battle — one between a Canadian mining company and a community trying to preserve its forests and mountains.

Development and Peace — Caritas Canada’s partner, the Center for Spatial Justice (a.k.a. Beyond Istanbul) is working with the townspeople of Kirazli, in Turkey’s Çanakkale Province, who are concerned about the environmental and health impacts of a 1,500-acre gold mining project being funded by the Canadian company Alamos Gold. 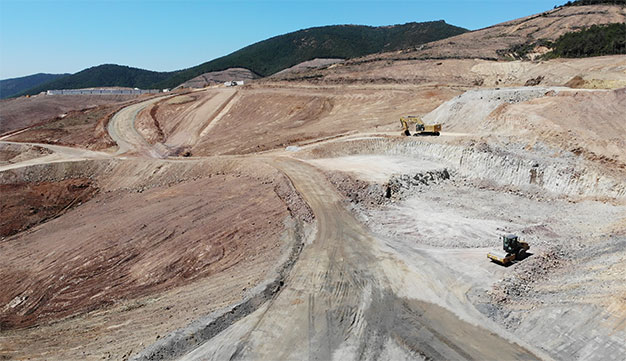 “As soon as the case became a topic in the media, three people from our team (two video editors and one of our founding members) went to the area. At that time, there were only a dozen local activists protesting at the mine site. They initiated a vigil. We documented the impact of the mining activity and the demands of the activists. We also took drone footage, which got the attention of media outlets including Reuters,” explained Yaşar Adnan Adanalı, Director at Beyond Istanbul. 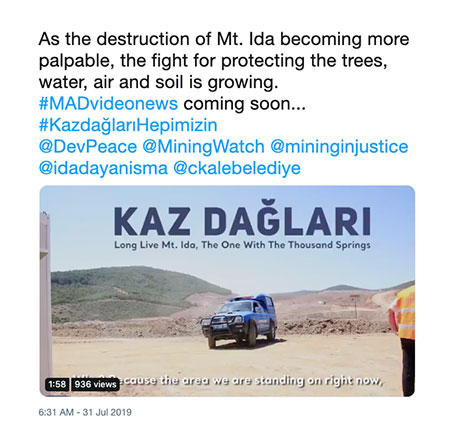 Beyond Istanbul supports citizens in recognizing the history and value of their living spaces and reclaiming their rights when faced with development projects that undesirably transform their landscapes and adversely impact their quality of life. Development and Peace has been supporting the organization in its Environmental Justice Walks project and in producing Spatial Justice news videos.

The drone footage that Beyond Istanbul captured revealed far more than the initially estimated 46,000 trees were cut down to make way for the mine. One environmental organization estimated that at least 195,000 trees were cut. Word of this disproportionate deforestation spread quickly on social media and sparked outrage. Public anger was also fuelled by another video that Beyond Istanbul highlighted, in which the CEO of Alamos Gold extolled the mine’s high profit potential due to low investment costs. 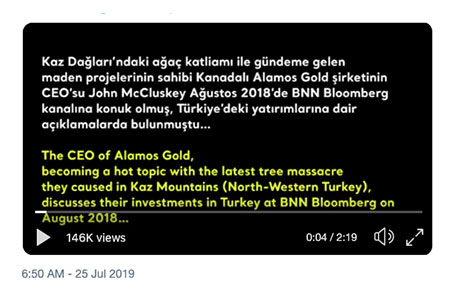 “We translated that video into Turkish and shared it on social media. That video really kicked off a debate on a Canadian mining company exploiting Turkey’s nature thanks to lack of environmental or social impact considerations. It became a national issue not only on social media but also in major media outlets,” Adanali said.

This galvanized widespread support and thousands of people began arriving from all over Turkey to join protests. In one peaceful demonstration, 5,000 people showed up in front of the mining site carrying signs with messages like, “We can do without gold, we can’t do without Mount Ida.” 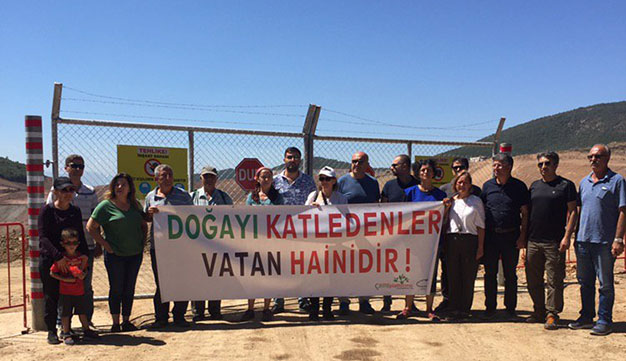 “Our struggle here derives from our constitutional right to live in a healthy environment. Our struggle is against poisoning the water basin that feeds into the only drinking water source in Çanakkale, the Atik Hisar Reservoir. It is to stop the pollution of our air, soil, water…,” said Rebiye Ünüvar, Deputy Mayor of Çanakkale.

The case that has received international media coverage once again raises concerns over the overseas actions of Canadian mining companies. For over 10 years, Development and Peace has been calling on the Canadian government to appoint an ombudsperson with the powers to investigate complaints from communities and restore Canada’s reputation as a human rights leader. However, the government has yet to create an office with the necessary powers to conduct proper investigations.

Development and Peace continues to be in solidarity with communities, like the people of Kirazli, who defend their rights in the face of large-scale development projects. “With the support of Development and Peace, we were able to make direct contact with various grassroots groups and environmental organizations, work with video editors, have a transport budget and purchase necessary equipment. In this way, we were able to respond promptly to the case, send a team to the ground zero and create a social impact across the nation,” Adanali said.