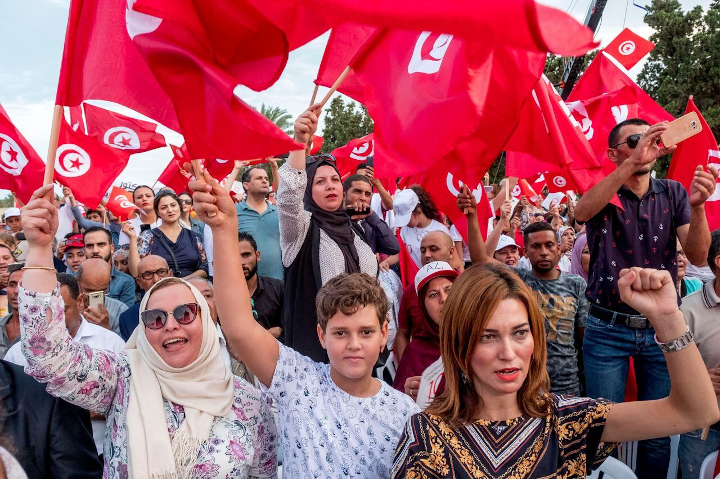 Civil society groups like Barr al-Aman and Tunisian Observatory of the Economy have enhanced citizen participation at all levels of the Tunisian polity.

Development and Peace — Caritas Canada is proud to present a conversation with the Tunisian Observatory of the Economy and Barr al-Aman, two of its partners who have spearheaded the democratization of Tunisia in the leadup to the recent presidential elections.

In Tunisia’s presidential election of September 15, 2019, two rank outsiders — independent candidate Kais Saied and Nabil Karoui, leader of the new Heart of Tunisia party — trounced establishment candidates. Securing a landslide in the subsequent runoff election, Saied became the president in October. He has now invited a prime ministerial nominee of the moderate Islamist Ennahdha party to form a government.

The presidential election and the ongoing formation of what will be a coalition government evince Tunisia’s progress toward creating a democratic, rights-based society and confirm the country’s vanguard role in the region.

In 2011, Tunisians overthrew a dictatorial regime that had held power for 23 years. They had been rallied by the death of Mohamed Bouazizi, a young street vendor who had set himself alight to protest official harassment. The Tunisian example sparked the Arab Spring of public agitations for democratic reform in Egypt, Libya, Sudan, Yemen, Syria, Saudi Arabia, Bahrain, Kuwait, Oman, Jordan, Morocco and other Arab countries.

While this larger movement fizzled out after some early success, democratization was sustained in Tunisia. However, it remains fragile and susceptible to economic instability and radicalization. Preventing its backslide are the very civil society groups that led the original call for democracy and served as watchdogs during the elections.

Our partners, the defenders of democracy

As a collective of academics, researchers and activists, Tunisian Observatory of the Economy monitors the activities of international financial institutions; traces their influence on domestic decision-makers; critiques economic policy; and produces reports that educate people about and advocate for policies that favour equity and create opportunity for ordinary people.

Barr al-Aman is an independent media association that produces original radio, television, online and print journalism that critically examines government policies and their affects on citizens’ lives. To empower and educate the citizenry, they seek to hold politicians and government officials to account and use social media creatively to amplify their impact.

D&P: What was the significance of the recent presidential elections for Tunisia’s democratic transition?

Jihen Chandoul, co-founder and head of studies and advocacy, Tunisian Observatory of the Economy (TOE): These elections represented a key moment in the expression of political choice and helped anchor Tunisia’s burgeoning democracy. And, as we saw, Tunisians sent a strong message by favouring “outsiders” and sanctioning established parties.

Mohamed Haddad, editor-in-chief, Barr al-Aman (BAA): The merit of these elections is that they took place at all! I remember the electoral process being constantly questioned by those who felt that the tide had turned against them. We also cannot ignore their result: a fragmentation of dominant political actors and an undeniable victory for the new head of state.

D&P: You alluded to two newcomers defeating established candidates in the first round of the presidential election. What were your impressions of that result?

Chandoul (TOE): Tunisian voters punished parties that have governed since 2011. This should push these parties to question themselves, to rise above partisan politics and to reinvest in the real problems of Tunisians. The result was also a reminder that economic and social issues were at the heart of the 2011 revolution and not any debate on Islamism or modernism. Finally, Tunisian voters showed great independence, not allowing propaganda to influence their vote.

Haddad (BAA): Here, I’ll quote our president, Khansa Ben Tarjem, who said, “These presidential elections have put at the heart of the debate hot topics — poverty, social justice and ethics in politics. Thanks to both candidates for sparing us sterile identitarian debates.”

D&P: Now that the elections have been a success, what remains to be done in terms of democracy and citizen participation?

Chandoul (TOE): Democracy is a long process. It is still under construction in Tunisia. Key institutions like a constitutional court and other constitutional bodies still need to be built or developed. The decentralization of power to local levels through participatory means also remains a challenge.

Haddad (BAA): The question of local democracy will be at the heart of the debate in coming years. Some bureaucrats and municipal counsellors are dissatisfied with the decentralization to which President Saied says he’s committed. Tunisians in the regions have told us they would like to have more levers to turn their will into community projects. It will be exciting to see how emerging bottom-up governments will interact with the decentralizing central state; how marginalized groups will voice dissent or participate in decision-making; and how the state will be transformed by newly elected officials.

Rather than being worrisome, this plethora of questions represents an open field of possibilities. It will require us to be more alert than ever and to be ready to respond to citizens’ need for information, explanation and dialogue. As a media and research organization, we can play a key role. We are also closely following the situation in neighbouring Libya and Algeria, which will have a significant impact on the region’s socioeconomics and security.

D&P: What has been the role of civil society in building democracy in Tunisia?

Chandoul (TOE): Unlike the political class, Tunisia’s active civil society enjoys a positive reputation. It works at all levels of society to strengthen democracy and improve citizen participation in monitoring parliament, economic reform, national elections, decentralization and fighting corruption. It acts a counter-power to ensure the success of democratic principles and institutions enshrined in the 2014 Constitution.

Haddad (BAA): Civil society in Tunisia plays a key role as an observer and “listener.” For example, we work with public institutions to understand their operations and help with their mission. We also collaborate with the Court of Auditors and Tunisian National Radio on matters of access to information. Our current challenge is making these synergies sustainable.

D&P: What do you regard as your most significant success?

Chandoul (TOE): That we have convinced local actors that they can be the solution to their problems is a real success. This awakening has shifted people’s paradigm from waiting for external help (from the state or others) to becoming agents of local and national change.

Haddad (BAA): A Barr al-Aman success story is the organization in May 2018 of debates between the frontrunners in the Tunis municipal elections. Candidates debated their platforms and programs, giving citizens a clear idea of the how their future elected representatives would handle files that affect their lives. The even-handed questioning of candidates was based on their electoral promises and our study of their manifestoes and publicly available data (court documents, auditor’s reports, legal texts, etc.). 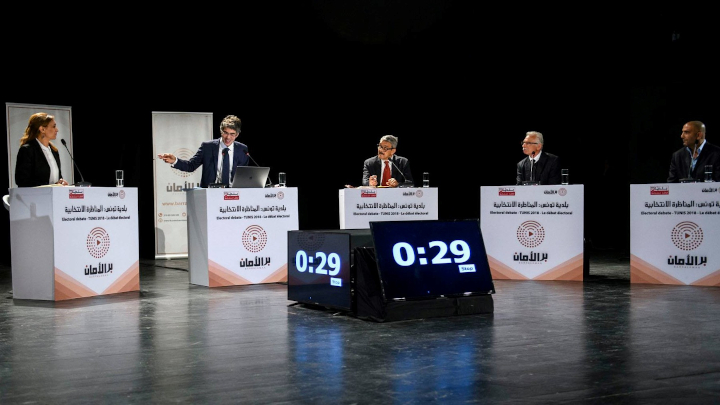 D&P: How have activities supported by Development and Peace helped democratize Tunisia?

Chandoul (TOE): At the national level, your support has strengthened our demand for more participatory and transparent budgetary control through an organic budget bill that is being debated in parliament. Thanks to our advocacy, a new law now obliges the government to publish an annual report on the socioeconomic impact of its tax and financial incentives.

At the regional level, your support is sustaining a project that builds local associations’ capacity to monitor the budgets of public works in Gabès City. We have also developed a methodology for these associations to conceive concrete economic and social development solutions for their cities and regions. Thus, local actors can now not only monitor government projects but also participate in their conception and design.

Haddad (BAA): Tunisia was divided between those who made decisions and those who suffered their consequences. Decision-making was opaque and did not meet citizens’ expectations. Today, we can and do question decisions and how they are made. Our mission is to improve public policy by evaluating it and exposing the mechanisms of opacity.
Our project, supported by Development by Peace, is helping us show citizens how the decisions that affect them are made. It is enabling citizens to observe, question, seek accountability and participate. It is a bit like a users’ guide for democracy.

D&P: How can democracy be further strengthened in the country?

Chandoul (TOE): Democracy can be further strengthened by applying the constitution and by establishing institutions like a constitutional court. At the local level, it can be strengthened through municipal elections, the creation of local institutions, and engaging people in local public life through participatory democracy mechanisms. Finally, democracy can be reinforced by facilitating public debate, particularly on economic issues that tend to be left to experts.

Haddad (BAA): Democracy can be improved in Tunisia if social, economic and geographical injustice in access to care, education and security are made to diminish. By reporting on public policies and the impacts of elected officials’ decisions, Barr al-Aman is measuring these injustices and seeking ways to eliminate them.

D&P: What changes have you seen in Tunisia since the Arab Spring?

Chandoul (TOE): The most significant change since the 2011 revolution has been the liberation of citizens’ energies through civil and political freedoms and their categorical refusal to return to the dark days. This has enabled the development of citizen initiatives and counter-powers that influence political, economic and social change. Several elections have taken place, and despite the return of conservative forces, democracy is on the march.

Haddad (BAA): Since the revolution, one major change has occurred in Tunisia — freedom of expression. As a media outlet, Barr al-Aman is at the heart of this change. Press freedom and freedom of expression are now a given, even if journalists and citizens are often persecuted. Now, though, we have the means to expose and denounce such abuses.

D&P: Can Tunisia serve as a model? What can Tunisia’s experience teach those who are striving for democracy in other countries in the region?

Chandoul (TOE): Tunisia can be a model for resolving political conflicts through dialogue, something that won us the 2015 Nobel Peace Prize. On the other hand, a relentless quest for consensus on issues, including socioeconomic ones, has hollowed out organic spaces of debate such as parliament. Although it can alleviate political crises, overemphasizing consensus can pose a risk to democracy. One lesson from Tunisia is that some democratic victories take time to achieve and patience to sustain.

Haddad (BAA): “Modelling” the Tunisian experience can be problematic. Doing so risks decontextualizing the national historical trajectories of other countries in the region. It does not account for concrete conditions that make one or other “model” possible. I don’t think the concept of a model is applicable in this situation. Each country has its own specificity, its own journey, its own history, etc.