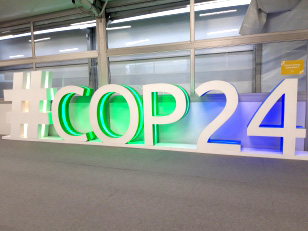 After two weeks of negotiations, the annual United Nations climate change conference (COP24), which took place in Katowice, Poland, ended with the successful adoption of the Paris Rulebook, which defines how countries will report their emissions. The urgency of the climate crisis, however, was not adequately reflected in negotiations between world leaders.

In the recent landmark IPCC report, experts warned us about the catastrophic impacts of global warming if it exceeds 1.5˚C, including more devastating wildfires, floods and famine. Currently, the planet is warming by about 0.2˚C each decade. The IPCC report clearly stated that we are in a time of climate emergency and that in order to save our planet, everyone, from national to municipal governments to the private sector to individual citizens, will need to make drastic changes in our policies and our lifestyles.

As negotiators head home, the work ahead for each country is to implement stronger measures that will keep the temperature rise within the 1.5˚C temperature limit. Progress was also made on climate finance which will assist poorer countries with the implementation of mitigation and adaptation measures, but there were no solid financial commitments. The negotiations in Poland were difficult, considering that both the United States and Brazil have promised to withdraw from the Paris Agreement in 2020. The Brazilian government also just cancelled its plans to host the annual COP meeting in 2019.

In order to come to an agreement, contentious issues were postponed until next year, including the mechanics of an emissions trading system, and the issue of setting more ambitious targets considering the recent science showing a worsening trend in climate change.

Citizens have been out in the streets in Canadian cities and around the world, demanding ambitious climate action from our governments to protect our world for future generations. Canada will need to be bold and ambitious as it implements a just transition to sustainable energy, agriculture, and transportation systems. The Canadian government will also need to fulfill its obligation to assist developing countries, who are not responsible for the current climate crisis, but face the most devastating impacts. During the negotiations, Canada helped to build consensus among the countries, but the government did not reiterate its announcement that it will set tougher emissions-cutting plans by the end of 2020, as Environment and Climate Change Minister Catherine McKenna had promised before the talks began. In order to ensure Canada is doing its part, Minister McKenna will need to quickly announce that Canada will have a process in 2019 to put the country on track to a 1.5˚C-compatible climate pledge.

The Catholic Church and its members have continued to stay committed to bold climate action, including the Holy See who called for “urgent action and urgent need for a new solidarity” in the climate talks.

In its concluding statement, the Holy See delegation noted its disappointment that, “the rulebook seems to downplay human rights, critical in reflecting the human face of climate change, which affects the most vulnerable people on earth. Their cry and that of the earth demand more ambition and greater urgency.”

For Development and Peace-Caritas Canada, climate policies must be based on solidarity, since we are one human family who share one common home. According to Serge Langlois, Executive Director of Development and Peace, “people and the environment must be put before profit if we wish to preserve our planet for our children and future generations.”