From May 23rd to May 28th, Caritas Internationalis held its 21st General Assembly in Rome under the theme One Human Family, One Common Home, and during the five-day event Development and Peace had the honour of being elected to the Representative Council to represent the region of North America for the next four years.  Development and Peace’s delegation included Evelyne Beaudoin, President of Development and Peace, Serge Langlois, Executive Director and Kelly Di Domenico, Director of Communications. 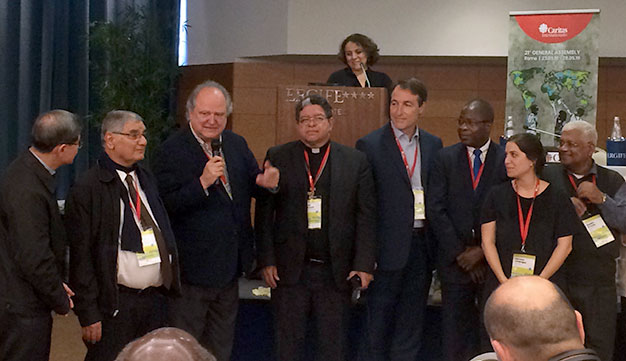 As the Canadian member of this global Catholic charitable confederation, Development and Peace actively participated in the assembly, which opened with a mass celebrated by Pope Francis at Saint Peter’s Basilica. During the homily, his Holiness cautioned delegates to be weary of prioritizing efficiency over taking the time to listen and be with the poor:

“This is the temptation to efficiency, of thinking that the Church is all right if it has everything under control, if it lives without disturbances, with its agenda always in order. But the Lord does not work that way, in fact, he does not send a response from heaven to the Apostles, he sends the Holy Spirit. And the Spirit does not come bearing an agenda, he comes as fire.”

Each morning, delegates from over 140 countries were provided with a spiritual reflection from His Eminence Cardinal Luis Antonio Tagle, President of Caritas and archbishop of Manila, before entering into discussions on the confederation’s priorities for the next four years. Videos, three of which featured the work of Development and Peace, were shown to launch and inspire debates towards concrete actions.

One Human Family, One Common Home – In the heart of Church

One Human Family, One Common Home

Strengthening the role of women and youth within the confederation was a primary concern, and recommendations from a women’s and a youth forum, both held prior to the assembly were put forward. The assembly voted in favour of ensuring one-third representation of women on its Representative Council, as well as having two youth representative seats added. 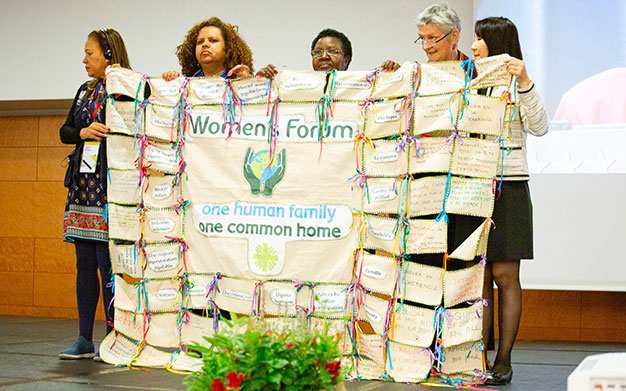 Delegates also had the honour of a private audience with Pope Francis, who built on his homily by warning of the risk of false charity:  “This is why I would like to reiterate that charity is not an idea or a pious feeling, but is an experiential encounter with Christ; it is the desire to live with the heart of God Who does not ask us to have a generic love, affection, solidarity, etc. for the poor, but to meet Himself in them (see Mt 25: 31-46), in the style of poverty.”

The assembly ended with the re-election of Cardinal Tagle as President of the confederation and Aloysius John, who is currently the head of institutional development and capacity building at Caritas Internationalis, as the new Secretary General, replacing Michel Roy, who ended his second mandate with the confederation.