Gabrielle Lachance, a sociologist by training and executive director of Development and Peace from 1988 to 1996, passed away Friday night at the Institut universitaire de cardiologie et de pneumologie de Québec (Hôpital Laval).

Ms. Lachance was the first – and to this day still the only – female executive director of Development and Peace. She entered into her position in 1988, and over the next 10 years moved the organization towards becoming one of the most influential in the Church in Canada and society in general.

In her first months as executive director, she participated in several campaigns organized by the members of Development and Peace to maintain economic sanctions against South Africa in protest of apartheid. Having previously worked in South Africa from 1964 to 1968 to help establish a social work program in the former province of Natal, she knew the country and its issues well.

Three months after the liberation of Nelson Mandela in February 1990, she participated in the creation of the Nelson Mandela Fund, alongside Mandela himself, who had become leader of the African National Congress (ANC), and Joe Clark, who at the time was serving as Secretary of State of Foreign Affairs. The fund was created to support educational resources in South Africa. 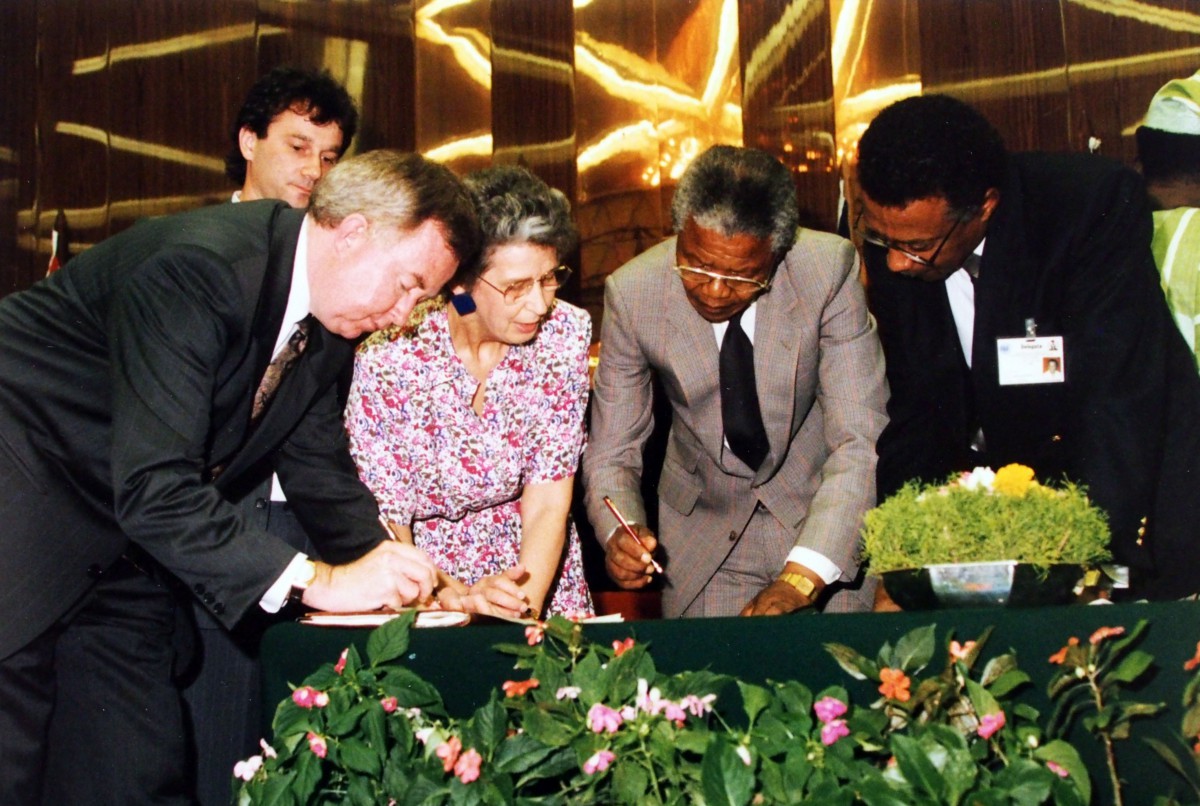 Gabrielle Lachance (center), during the creation of the Nelson Mandela Fund for Education in South Africa

In 1992, on the occasion of the 25th anniversary of Development and Peace, Ms. Lachance estimated that the organization was at an historical crossroad.

“Factors such as the collapse of state socialism, the exacerbation of neo-liberalism, the globalization of the world economy and its domination over political structures, the acuteness and breadth of poverty, coupled with a rapid deterioration of the environment – all represent challenges to our organization,” she wrote in Journey of Solidarity, a book celebrating Development and Peace’s 25 years of existence.

She believed that Development and Peace could respond to the challenges created by these new political and economic models, and could develop strategies for action, saying that “…the causes engendering the distortions in the development process are structural in nature. These problems must be tackled at their source, where the decisions affecting Third World countries are made – in other words, at the level of large international institutions and national governments.”

From that time on, Development and Peace has developed education campaigns that seek to connect injustices occurring in the Global South to decisions made by the Government of Canada, or by large international bodies within which Canada participates.

Prior to occupying her directorship at Development and Peace, Ms. Lachance was director of the Secular Institute of the Oblate Missionaries of Mary Immaculate from 1968 to 1974, project director of the Quebec Institute on Research and Culture from 1980 to 1987 and president of the Catholic Bible Society (SOCABI) from 1999 to 2004.

In 1996, at the end of her mandate as executive director, Ms. Lachance became an active member of Development and Peace and continued to participate in the organization’s annual fundraising and education campaigns.

On the day of her passing, she had attended a meeting of Development and Peace members in Quebec City, and is fondly remembered by her fellow members and friends there. They had the following to share: “For us, in the Diocese of Quebec, Gabrielle was a big sister, a counsellor and a friend. Development and Peace was a part of her being. Under her gentle demeanor, was a soul illuminated by the struggle for justice and peace, and which surpassed all other considerations.”

This extraordinary women will always remain in our hearts.