The World Social Forum (WSF) is the largest civil society gathering and is aimed at addressing the problems of our time. It is a place for social movements and citizens to come together to discuss and debate freely in order to develop real actions towards creating a just world. International solidarity, social and environmental justice, the social economy, as well as participatory democracy – these are just a few of the themes that will be at heart of the WSF.

The 2016 WSF will be historic as it will be the first time since the start of the event in 2001 in Porto Alegre, Brazil, that it will take place in a Northern country. This move shows that today were are experiencing a global crisis that is affecting all of humanity, and we must go beyond our North-South divide so that actors from all continents can act together to come up with solutions.

It is the city of Montreal in the province of Quebec that will be hosting the 2016 WSF. From August 9-14, 2016, between 50-80,000 people, representing more than 5,000 civil society organizations, will be in Montreal to participate in over 1,500 workshops, conferences and artistic performances. Several of Development and Peace’s partners from the Global South will be present, along with various other organizations from our networks, including CIDSE.

Development and Peace intends to participate actively in mobilization efforts around the WSF and in its programming as well. As the WSF puts forward the approach that we encourage as an organization, such as the active participation of civil society, in various forms, to building fairer, more equitable and more environmentally friendly societies at the center of which prevails the dignity of individuals and communities, especially the most vulnerable.

Development and Peace’s involvement will be varied and will include different initiatives, which will be announced over the coming months. One of the workshops we are organizing will be on the theme of ecological justice, where representatives from our partner organizations will speak of the link between the current prevailing economic model, which is based infinite growth, and our current ecological crisis from the perspective of their own experiences.

In parallel to the WSF, Development and Peace will also support the 7th edition of the World Forum on Theology and Liberation (WFTL) which will take place in Montreal from August 8 -13, 2016. The WFTL is an ecumenical space for pluralist dialogue that aims to create spirituality and theology around issues of our time from the perspective of liberation. Just like the WSF, it is the first time that a WFTL will be held in a Northern country. It is being organized by the Ecumenical Network on Justice, Ecology and Peace (Réseau œcuménique justice, écologie et paix – ROJEP) , which has created a committee with representatives from various Quebec groups, along with the General Secretariat of the WFTL which is based in Porto Alegre.

Development and Peace is very proud to support these two important initiatives and we are looking forward to sharing these unique experiences with our partners and members. We would like to remind you that you can benefit from the pre-registration rate of $20 CAD (regular rate $40 CAD) until Wednesday, March 31st, 2016, which gives you full access to the 2016 WSF.

We hope to see you there! 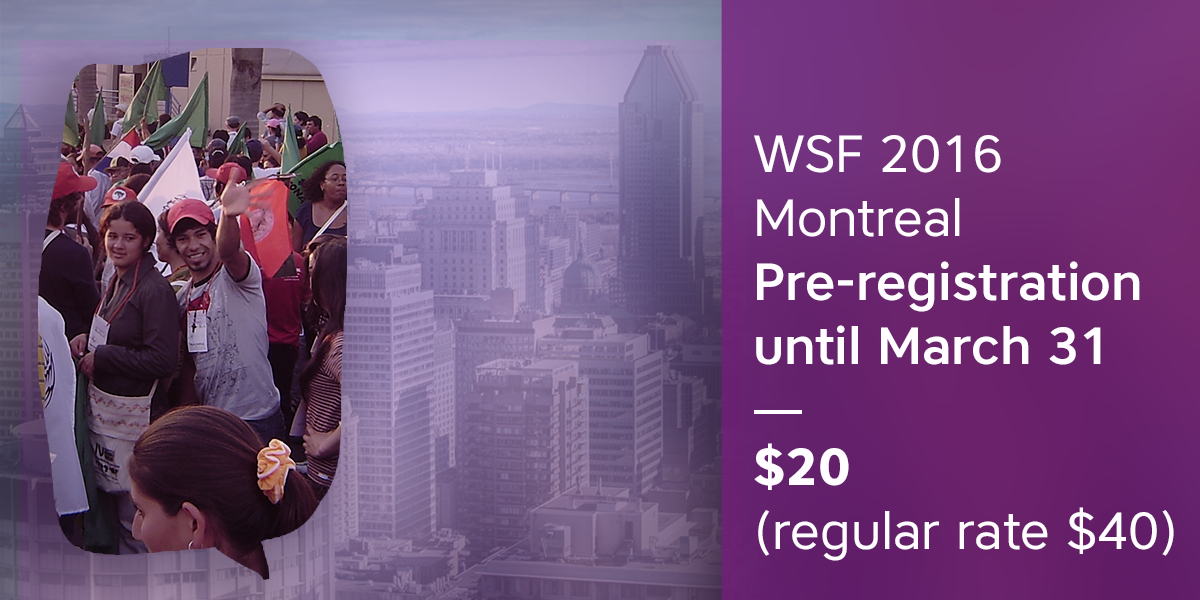 Documentation – Development and Peace Delegation (36 years old or over)