Thanks to your generosity and solidarity, we are able to help our partners bring much-needed support to the people of Lebanon!

If you haven’t donated yet, there is still time to do so. 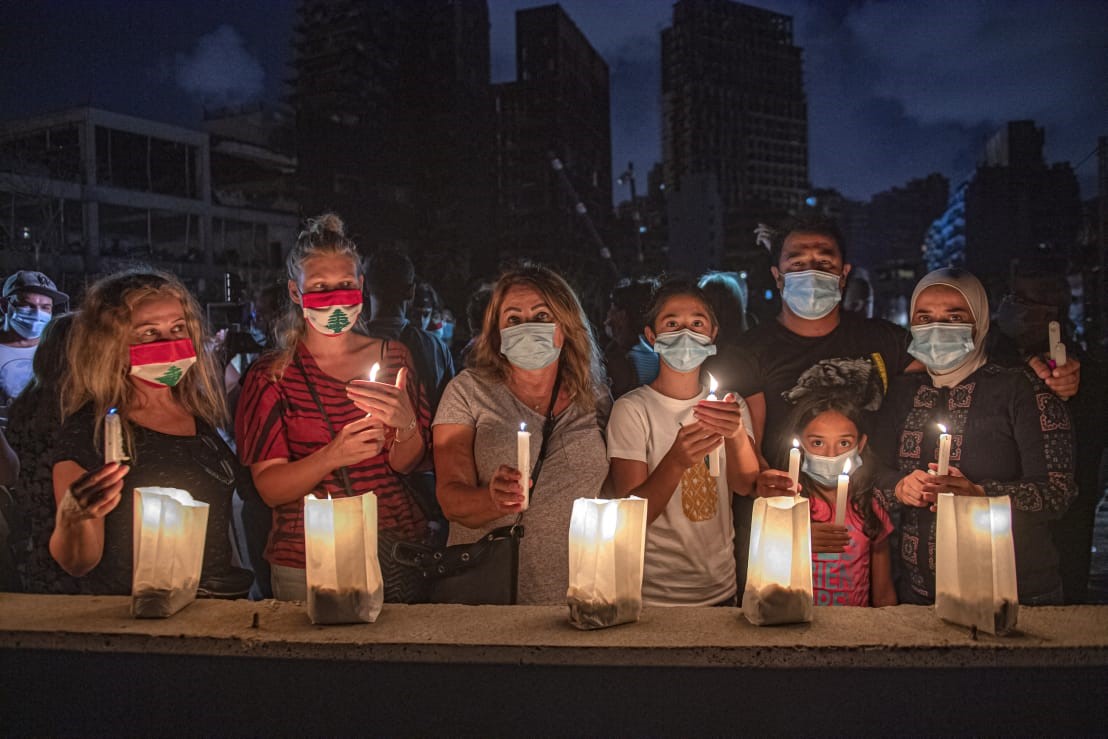 On Tuesday, August 11, a week after the Beirut explosion that killed many and devastated the city, people marched and held a vigil in honour of the victims. (Picture: Adyan Foundation)

Yet another crisis for the people of Lebanon

By September 3, 2020, the catastrophic blast at Beirut’s port had killed over 192 and injured more than 6,500 people. Around 300,000 families who lost their homes are now in need of shelter, food and assistance. Although our partners stepped in to help them right since day one, their needs are immense. This crisis will require not just an immediate response today, but a sustained response well into the future to support durable and equitable solutions for the Lebanese people and the refugee and migrant populations they host.

This is yet another trial for a people already struggling with an unprecedented social, economic, and political crisis. The explosion sent a wave of injured people to hospitals and clinics, many of which had themselves been damaged or destroyed by the blast. Moreover, these medical facilities, short of resources because of an ongoing economic crisis, had already been struggling to cope with the COVID-19 crisis.

In recent months, economic contraction, increasing poverty and rising prices have compounded the needs of the Lebanese people and the estimated 1.5 million refugees who live in Lebanon. Many are sinking further into debt. Having destroyed the country’s main grain reserves and the port that handles all its food imports, the explosion has also created a threat to the precarious food and social security of the population.

Political instability further complicates the situation. Since the government resigned under public pressure on August 10, there has been no agreement on a new political trajectory and the process continues to be stalled.

Our partners’ work: Adyan Foundation launches the ‘We stand with Beirut’ initiative 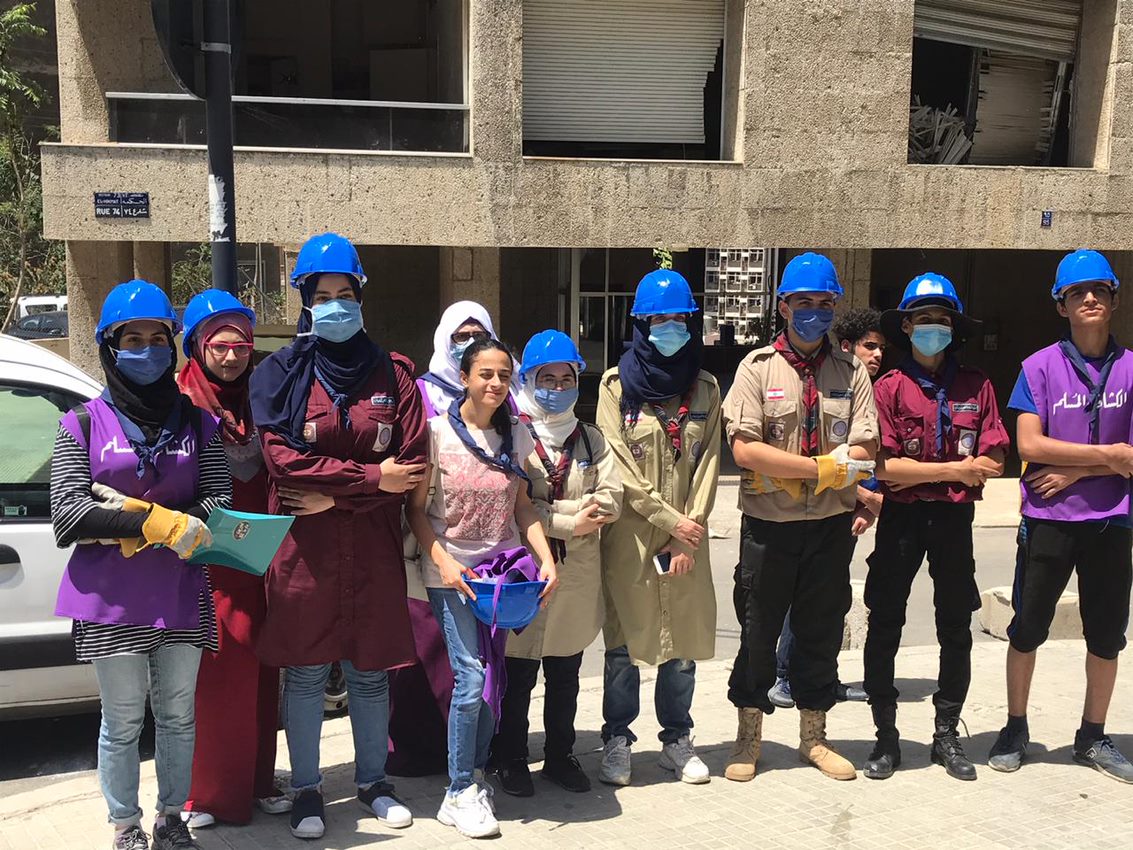 Within days of the explosion, Adyan Foundation launched an initiative to help affected people. It called upon its own networks of youths, volunteers, ambassadors and families; members of the Forum of Religious Social Responsibility; and other community members to join volunteering actions to secure urgent needs for the blast victims. Responding to the call in huge numbers, volunteers quickly began clearing debris from the streets and distributing food, water and essential items. In the medium and longer term, Adyan Foundation will concentrate its emergency response of four key priority areas—mental health, small business repairs, house repairs and food security.

Our partners’ work: Caritas Lebanon focusing on vulnerable families who have lost everything

In the immediate aftermath of the blast, Caritas Lebanon rapidly deployed teams to the affected areas to:

Until August 27, Caritas Lebanon had provided over 44,500 hot meals and other urgent help to over 64,500 people.  Caritas Lebanon will now determine how to best support the people of Lebanon on the longer term. 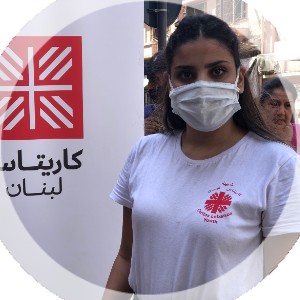 Lauren began her journey with Caritas Lebanon in January 2020. Since the explosion destroyed Beirut’s port and ravaged its precincts, she has been continuously supporting the organisation by distributing food to people in need.

“We are working round the clock,” Lauren says. “Sometimes, I am in the food tent day and night to distribute food items. All I hope is that people are equally supported.” She thanks organisations and people from outside Lebanon for their donations that support this work. She says they make her believe again in humanity. 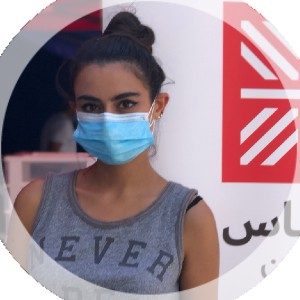 When the explosion happened, Maritta was visiting friends in Beirut’s Hamra district. Although it was nearly five kilometres from the port, the building she was in shook all over. After ascertaining her family was safe, Maritta, a recent medical graduate, rushed to help out at her hospital’s emergency department. She was at a loss for words to describe the sight that greeted her. “This could not have happened at a worse time. We are in the middle of a pandemic and an economic crisis. The hospitals are devoid of medical supplies due to the shortage of foreign currency and increased prices.” Maritta volunteered with Caritas Lebanon’s medical team which has been seeing around 100 patients every day.
Your donation enables our partners to support even more affected people for longer.
GIVE NOW 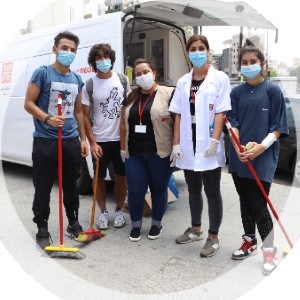 At the frontlines young people are working non-stop, helping clear rubble from around 75 houses every day; and providing food, water, medicines and first aid to those most in need. Every day, at least 500 people approach our partners’ field office tents for help. Many are asking for support with renovating their houses.
In the aftermath of this tragedy, the people of Lebanon need our solidarity. We thank you for your support and your generosity and join you in praying for our sisters and brothers in Lebanon and the wider Middle East.
Tweet