With Canada’s recent change of government, Development and Peace wrote a letter to initiate dialogue with the new Prime Minister of Canada, the Right Honourable Justin Trudeau.Development and Peace wrote to the Prime Minister to congratulate him but mainly to share our recommendations on three urgent global issues related to social and economic justice: climate change, the Syrian crisis, and the Canadian extractive industry. Development and Peace is asking the government to act rapidly on these three issues to ensure that Canada can take a leadership role on international solidarity and climate justice.

Development and Peace prioritizes its advocacy work in Canada and internationally and will also initiate dialogue with several ministers in the new federal cabinet, which is truly exemplary in terms of gender parity and cultural diversity. 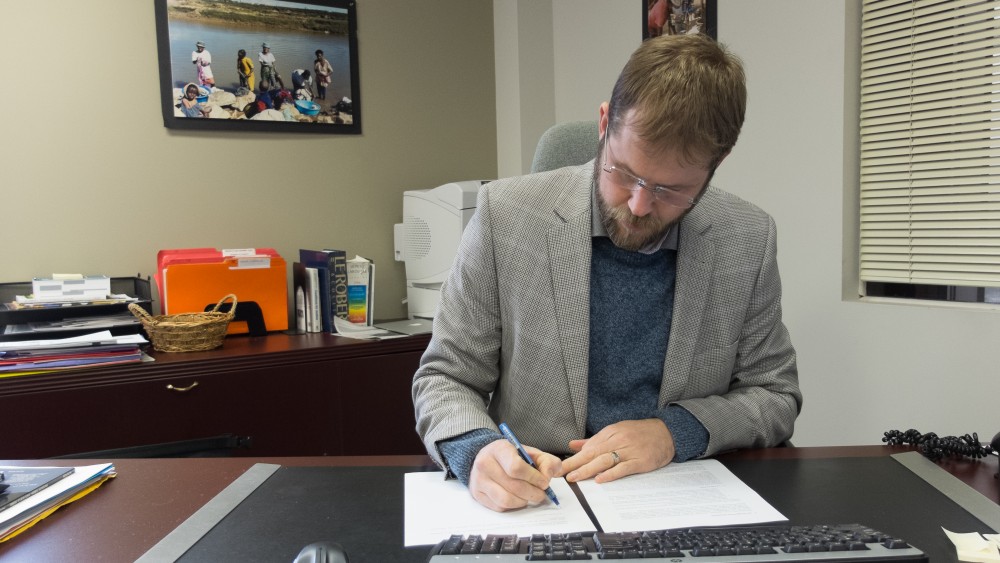 On behalf of the members and partners of DEVELOPMENT AND PEACE, I wish to express our most sincere congratulations on your and the Liberal Party of Canada’s victory in the October 19, 2015 federal election. We would like to take this opportunity to share our recommendations on three major social and economic justice issues that we are facing in both the Global South and the Global North: climate change, the Syrian crisis and the Canadian extractive industry.

DEVELOPMENT AND PEACE is a Catholic international solidarity organization. We work with partners in Africa, Latin America, Asia, the Middle East and Europe. We have thousands of members across Canada who support people living in poverty in their struggle for justice and human dignity.

In recent years, the Canadian government’s actions on social justice here in Canada and on the international stage has not lived up to Canadians’ expectations, nor to our past commitments. However, we welcome with optimism a number of the promises you made during your election campaign, including the increase to official development assistance and the return to a focus on the world’s poorest and most vulnerable nations. These commitments mark a turning point and an opportunity to re-establish Canada’s leadership on international aid. In addition, we welcome your openness to dialogue and we look forward to collaborating with you on this work.

It is with a sense of urgency that we ask your government to act quickly on three specific issues to ensure that Canada makes a fresh start in the area of social and economic justice.

DEVELOPMENT AND PEACE applauds the announcement of your participation in the United Nations Conference on Climate Change (COP21). We also support the Liberal Party’s election commitment to work in partnership with the provinces for the development of a Canadian energy strategy. We also commend your party’s election promises to support the development of clean energy sources and to gradually phase out fossil fuel production subsidies. However, to ensure that your government takes on a leadership role on climate issues, we urge you to take the following steps:

2. The crisis in Syria

For over four years now, Syria has been mired in a bloody civil war which began in the wake of the “Arab Spring” protests. During the “Arab Spring,” a series of major revolutions shook the Middle East and North Africa, exposing the structural causes of ill-development and injustice. In Syria, the protests spawned various opposition movements, some peaceful, others armed, contesting Bashar Al-Assad’s authoritarian regime and promoting a move towards democracy. However, the uprising also exposed the growing threat of extremist Islamic movements, which have been on the rise in the region since the war in Iraq. Kurdish rebels are also major actors in the conflict and its regionalization. Unfortunately, civilian populations bear the high price of this war, which has spread beyond Syria to the entire region, with direct repercussions on Europe due to the massive influx of Syrian and Iraqi refugees.

In this context, your commitment to welcome 25,000 Syrian refugees by the end of 2015 is highly commendable. We are also delighted with your decision to end Canada’s participation in air strikes on the Islamic State in Iraq and Syria while continuing to play a role within the international coalition that has joined forces against it.

May we remind your government that the current crisis is a striking illustration of the need for a negotiated political solution to the conflict, which has given rise to grave humanitarian crises. DEVELOPMENT AND PEACE wishes to reiterate a number of requests that we have already put forward to the Canadian government, namely,

The Canadian extractive industry has a strong presence across the world, in particular in the countries of the Global South. Unfortunately, certain companies in the sector are the focus of increasing and credible accusations of human rights violations. In the past, DEVELOPMENT AND PEACE has relied on your support for Bill C-300, introduced by John McKay in 2010, on responsible mining, and Bill C-584 on corporate social responsibility and the Canadian extractive industry in developing countries, introduced in 2014. The Canadian government must ensure that Canadian extractive companies respect human rights, including workers’ rights and environmental legislation regardless of where they operate.

This is why we reiterate our call for the creation of a legal mechanism in the form of an ombudsman for the extractive sector in Canada. This person would have the power to investigate complaints of violations and recommend sanctions against companies that do not respect human rights in the context of their operations.

In addition to the issues presented above related to our advocacy work, DEVELOPMENT AND PEACE is concerned about the rights of Indigenous peoples, both in Canada and in the countries of the Global South. We therefore draw your attention to the need to implement the recommendations of the Truth and Reconciliation Commission of Canada, in particular to comply with the rules and principles of the United Nations Declaration on the Rights of Indigenous Peoples, which Canada endorsed in 2012.

Finally, we wish to congratulate you on introducing gender parity and cultural diversity within your cabinet.

To conclude, Mr. Prime Minister, we would like to express our joy at the prospect of collaborating with you to establish priorities concerning matters of global affairs and international development. This is why we would appreciate meeting with you as soon as possible in order to discuss a new approach that would place social and economic justice at the heart of Canada’s domestic and foreign policy and actions. 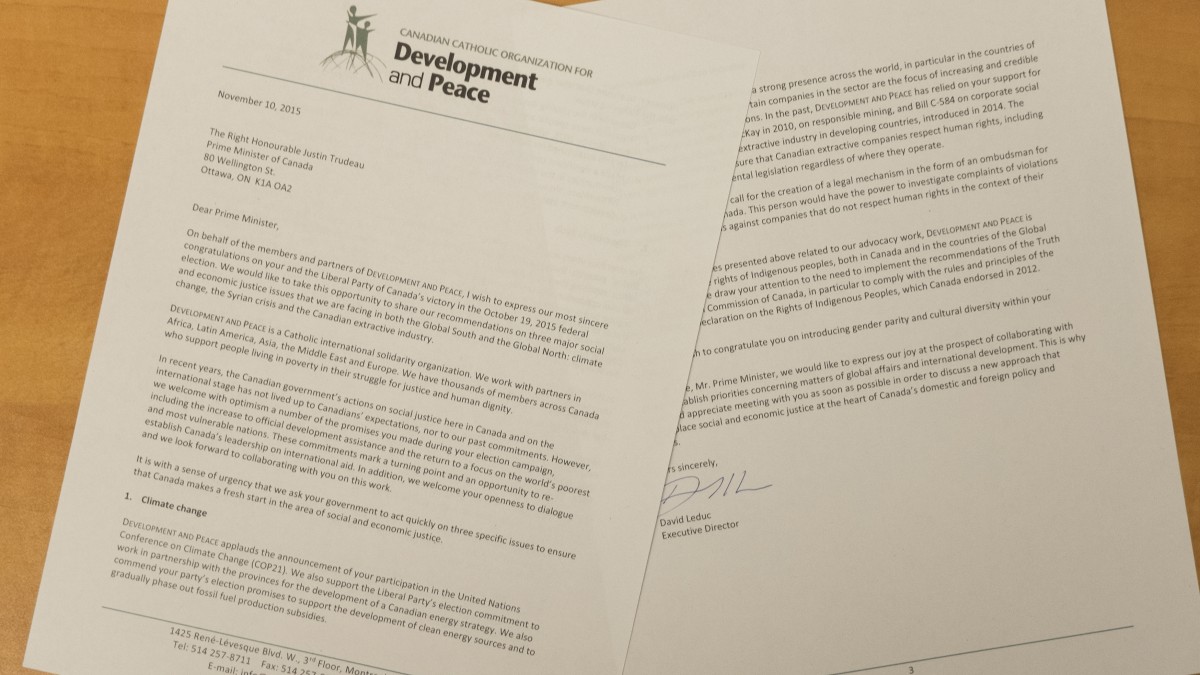