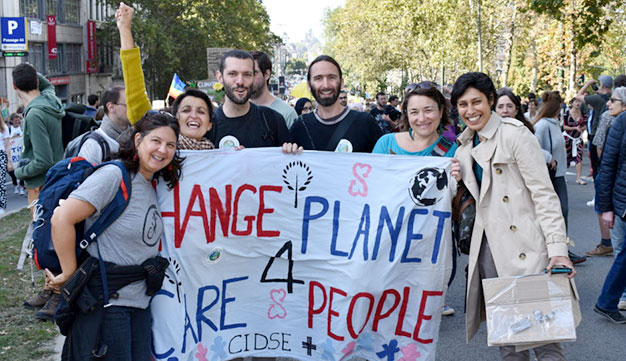 Momentum is building around the world of people calling for climate justice. In cities and towns, among the young and old, in the Global North and the Global South, people are naming the situation that we are living in “a climate emergency.” Leaders came together last weekend for the United Nations Climate Summit in New York City to share their plans of how they will reduce greenhouse gas emissions by 45 per cent over the next decade, and to reach net zero emissions by 2050. Achieving these goals will require leadership, commitment, and integrity, but it is the only choice we have.

On the eve of the Climate Summit, Development and Peace-Caritas Canada joined other members of CIDSE, the international network of Catholic social justice organizations, to issue an urgent joint statement, calling for an ecological transition that will necessitate transforming government policies in a way that ensures social justice. The statement declares:

“Real integrity is demonstrated by the coherence of implementation policies with social justice, which is a basic requirement in order to achieve the Agenda 2030. Bringing to scale the models and solutions proposed by civil society in policy at the national level would challenge the status quo of business as usual, but this is what has to be done.”

With the highest per capita rate of greenhouse gas emissions of any G20 country, Canada is not doing what it needs to do to address the climate emergency. The latest report on emissions submitted by Canada to the United Nations showed a 2% increase in greenhouse gases. Canada has stated that it is a climate leader, but the report proves otherwise.

Leaders of Canada’s 64 Congregations of Catholic Sisters recently made a joint statement calling on the country’s politicians to respond to the climate emergency by taking concrete, justice-based steps to avert it. Their statement also included the concrete steps the sisters themselves are taking, including divesting from fossil fuel portfolios, eliminating single-use plastics, planting trees, and reducing their energy use.

We all need to join together to address the climate emergency and take action For our Common Home.