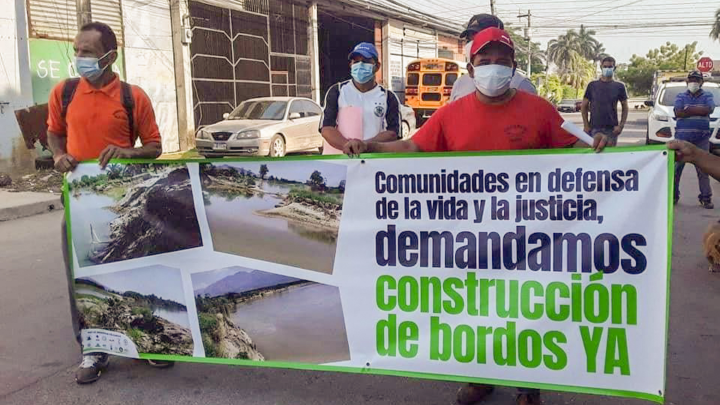 Hurricane-affected communities have been pressing for the reconstruction of river embankments in the Sula Valley.

Arriving close together in November 2020, Hurricanes Eta and Iota devastated large sections of Honduras. The rains and winds that lashed the country exacerbated pre-existing political, social and environmental crises, resulting in 4 million people being affected, one million people being evacuated, hundreds of communities being cut off, bridges and embankments being destroyed and many other adverse impacts. The most affected area of the country was the northwest, especially the Sula Valley. Drained by several rivers including the Ulúa, the largest, this agriculturally important region is home to more than 2 million people.

The amalgamated Jesuit organizations, Equipo de Reflexión, Investigación y Comunicación and Radio Progreso (ERIC-RP) worked with the Emergency and Solidarity Network humanitarian coalition to launch an emergency response plan in the affected communities on the right bank of the Ulúa.

Thanks to the solidarity of hundreds of people and organisations from within and outside Honduras, including Development and Peace — Caritas Canada, the affected families’ immediate needs were addressed within the first two months of the twin disaster. More than 10,000 emergency baskets containing food, water, hygiene and bio-security supplies and clothing were distributed in 119 shelters and settlements in 31 communities.

Then, at the beginning of the year, an agricultural recovery strategy was activated, following a detailed assessment that tallied crop losses in 32 affected communities at 28,276 manzanas (a South American land measure that equates to about 1.7 acres). Thus far, over 700 farmers who had lost everything have been provided native maize, bean and vegetable seeds and banana cuttings. The resulting harvests will soon be multiplied because the recipients have committed to contributing some of their produce to form a collective seed bank that can continue to benefit other people.

Realizing that all this help could prove useless if their houses and lands remained vulnerable to hurricanes and heavy rains, the communities themselves identified the need for an advocacy strategy to compel government action. Their demands included the repairing of dams, the dredging of rivers, the reforesting of upper river basins and a housing program.

Making the accompaniment of people in this struggle a priority, ERIC-RP and the Emergency and Solidarity Network emphasized the demand for repairing the damaged embankments of the Ulúa and its tributaries. The post-hurricane assessment had indicated that 12 kilometres of embankments needed repair. Until this is done, many communities will remain at risk from even a single rainstorm which is very likely in the cyclone season that begins every June.

The past few months have been a time of intense community organization, mobilization, awareness-raising, communication and dialogue with the authorities. There have been some advances. Several communities that were totally ignored by the authorities have now been included in the refurbishment plans. Work has also begun on repairing the embankments. 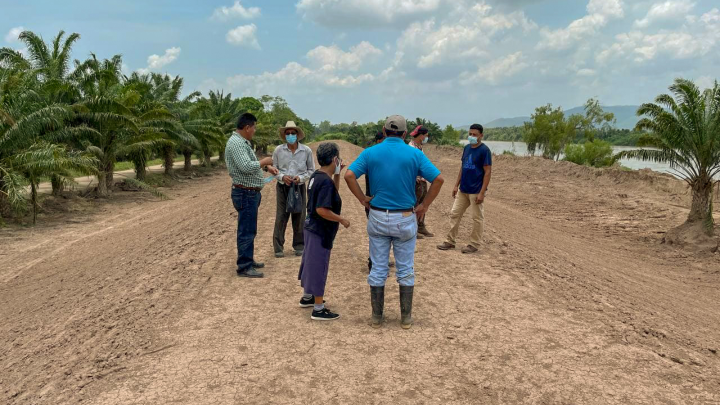 Local community leaders inspected work on the new embankments and came away unimpressed.

These achievements, however, are limited by lies, repression and corruption. Responsible authorities have not fulfilled commitments, public contracting process are opaque, the police often quell mobilizations and bribery and corruption mar the repair work. So poorly built are the new structures that local community leaders who audited them derided them as “sugar embankments.” Their appraisal proved right last month, when rainfall caused the river to quickly overflow its rebuilt banks and cut off two communities for a few days.

Yet, the communities are not giving up. Resolutely, they reiterate, “As long as our demands are not met, we will continue the struggle.” They plead, “We are entering the cyclone season; help us save lives.”

Banking on your support, ERIC-RP remains committed to accompanying these hardy Hondurans in this quest for security and dignity.