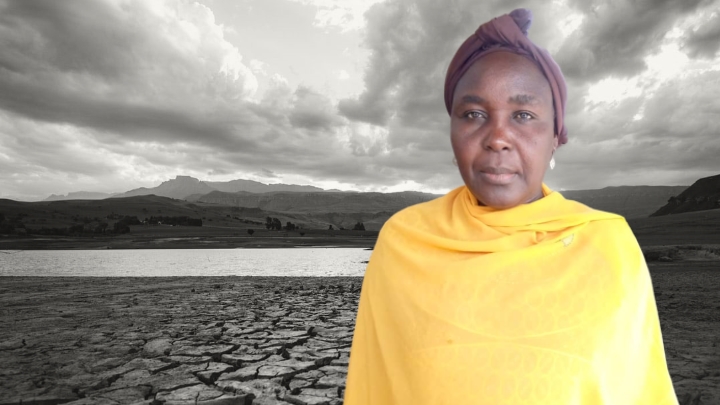 Victoria Filibus lost her home and husband to the Boko Haram conflict,
whose development and deepening have been traced to the depletion of Lake Chad due to climate change.

The United Nations defines desertification as “the degradation of land in arid, semi-arid and dry sub-humid areas.” In few places is this degradation more evident than the Lake Chad basin. And few have suffered its effects as much as Victoria Filibus.

On this World Day to Combat Desertification and Drought, we bring you the narratives of the lake and the lady, united by the efforts of one Development and Peace partner.

A tragedy and the tracing of its roots

Victoria’s husband died because a siege by Boko Haram kept him from potentially lifesaving medical treatment in Ibadan. In June 2013, the insurgents attacked their village, guns blazing. Victoria and her nine children barely escaped with their lives. Since then, they have lived in penury in a camp for internally displaced persons in Maiduguri, in Nigeria’s Borno State. “Life in the camp is terrible…. Even the food is not enough if you have many children,” Victoria said.

Canadians learnt of her tragedy, its context and its connection to climate change during the November 2019 launch of Boiling Over: Global Warming, Hunger and Violence in the Lake Chad Basin, a report produced by Development and Peace — Caritas Canada’s Nigerian partner, Social Action.

The report, co-authored by Dr. Isaac Asume Osuoka, director of Social Action, is the product of three years of research undertaken in the course of monitoring, advocacy and ecological justice work supported by Development and Peace. It offers an overview of the conflict and socioeconomic turmoil in the Lake Chad basin. Through the insights of displaced persons, local activists, journalists, academics and government officials, it analyses causal and contributory factors, including climate change and state development projects, and explores potential solutions.

What the report found

Lake Chad was once one of Africa’s largest freshwater bodies. From a peak of about 26,000 km2, its surface area has now shrunk to under 1,500 km2. While its expanse has varied historically, the lake’s extreme shrinkage in recent years is exacerbating economic, social and political strife in the four countries that constitute its basin—Chad, Cameroon, Niger and Nigeria.

What Canada must do

With its international commitment to leadership on climate change and human rights issues, the Government of Canada must:

On this #DesertificationAndDroughtDay, spare a thought for people like Victoria Filibus who have lost loved ones, livelihoods, homes and hope to conflict and climate change.https://t.co/tQ93Cuy9WO pic.twitter.com/tEHGCogx3S

On this #DesertificationAndDroughtDay, let’s remember that the roots of the Boko Haram conflict, to which Victoria Filibus lost so much, can be ultimately traced to drought and displacement in the Lake Chad basin.https://t.co/tQ93Cuy9WO pic.twitter.com/wSCwsnc9h2

On this #DesertificationAndDroughtDay, let’s acknowledge and resolve to repay the ecological debt that we in the West owe to the people of the Global South.https://t.co/tQ93Cuy9WO pic.twitter.com/X2EPVUvTgm