The words on the old poster say, “Oscar Romero is dead, a martyr, Rejoice.” There is also a drawing of the man along with the date of his assassination, March 24th, 1980. The poster was published not long after that terrible day. Today, on October 14th, 2018 he is not only a martyr but a saint. Millions are rejoicing.

The caption on our poster was taken from an editorial in the National Catholic Reporter shortly after he was assassinated. It is significant that today Romero’s sainthood is rooted in the recognition that he was not simply a martyr but a martyr, “killed in hatred of the faith”. In other words, those that killed Romero did not do so because he was a political agitator, a rebel, or an ideologue. They killed him because they hated his faith – a faith rooted in his identification with the poor and oppressed of his country, El Salvador. It is significant because it means that to hate and kill someone because he or she challenges those in power who oppress the poor, is to hate the Catholic faith. Romero’s sainthood is a beautiful declaration of the Church’s identification with the poor and oppressed.

Development and Peace, and other CIDSE organizations, sided with Romero during his ministry. We joined him in speaking out against the repression perpetrated by the government of his country and the US military aid that supported it. We helped finance his work and according to one former D&P staff member, were in telephone contact with him not long before his assassination.

Not everyone knows that Romero was assassinated in the act of celebrating the mass. At our 2012 Ontario regional assembly, Fr. Thomas Rosica CSB, shared a beautiful reflection which bears repeating on this sacred day,

Murdered in cold blood by an assassin’s bullet as he celebrated Mass in a hospital on March 24, 1980, his last words in the sermon just minutes before his death reminded his congregation of the parable of the wheat. “Those who surrender to the service of the poor through love of Christ, will live like the grain of wheat that dies.  It only apparently dies.  If it were not to die, it would remain a solitary grain.  The harvest comes because of the grain that dies…”

Oscar Romero is buried in the cathedral of San Salvador where he preached justice and defended the faith fearlessly, with boldness and courage.  The spirituality and faith behind his struggle for life flows from his belief in the God of the living who enters into human history to destroy the forces of death and allow the forces of life to heal, reconcile, and lift up those who walk in the valley of death. Archbishop Romero taught us that poverty and death go together.

Romero did not finish the celebration of the Eucharist.  Neither was the Eucharist of his funeral Mass finished. Gunfire and death were again present, and people had to rush into the cathedral for cover.  Many see his “unfinished Eucharist” as symbolic of what yet needs to be done in El Salvador and in every place throughout the world where people suffer in their struggle for liberation.

Who will finish the Eucharist? It is now up to us.  The Eucharist is the re-enactment of the drama of the passion, death, and resurrection of Jesus Christ.  What Romero was doing when he was killed was re-living the Paschal Mystery.  He was doing in ritual what he had done throughout his life: offering himself with Christ as a peace offering, so that the earth might be reconciled with its creator, and sins be forgiven.  So must it be for each and everyone who commits himself or herself to the authentic work of justice and peace.  The life and death of Archbishop Romero will be as fruitful as we choose to make it. 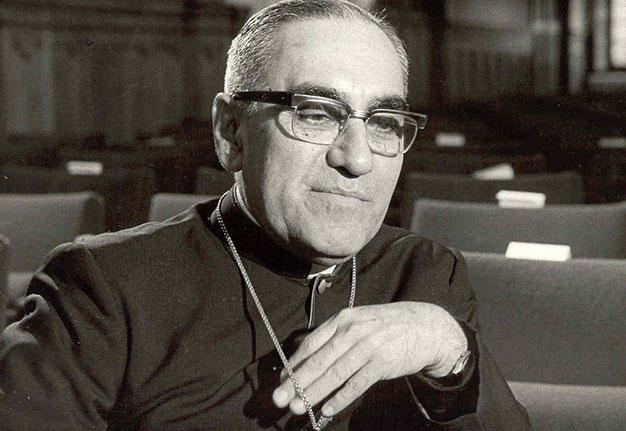