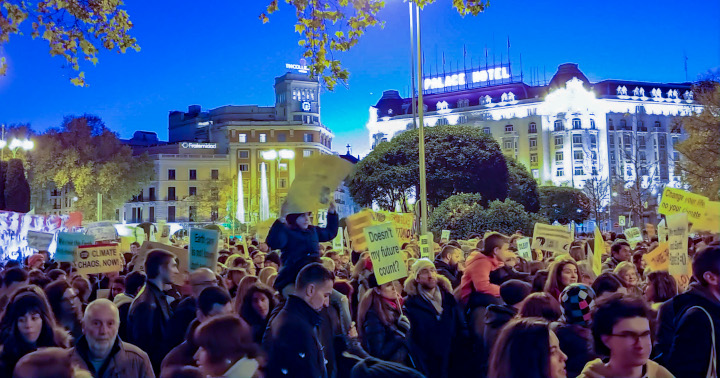 The COP25 summit capped a momentous year of mobilization on climate action.

Development and Peace — Caritas Canada is disappointed by the failure of world leaders to heed the calls of citizens and scientists at the 25th Conference of the Parties (COP25) to the United Nations Framework Convention on Climate Change, held in Madrid from December 2 to 13, 2019.

The COP25 summit capped a momentous year of mobilization on climate action. Around the world, children and youths led millions on marches through the streets and scientists reiterated in ever more dramatic reports that we are facing catastrophic climate change whose worst impacts will be felt by the poorest, the most vulnerable and future generations.

At COP25, progress was made on a Gender Action Plan designed to ensure that the global climate strategy includes a gender perspective. Signatory countries were also to negotiate modalities for Article 6 of the Paris Agreement, which focuses on reducing greenhouse gas emissions through a carbon trading system that imposes a limit on emissions and allows lower emitting countries and corporations to sell carbon credits to higher emitters.

To ensure that these carbon markets result in net reductions of emissions with minimal negative impacts, negotiators were to set clear rules for the transparent and fair accounting of carbon emissions and the inclusion of safeguards for human rights and the rights of Indigenous peoples.

Some of the carbon markets’ profits are to be used to help poorer countries adapt to the unfair and disproportionate impacts of climate change. Small island nations, imminently threatened by rising oceans, were pushing for more stringent carbon trading norms and more adaptation funding.

Belying these expectations, many rich countries looked for loopholes in carbon market rules and prioritized the continued exploitation of fossil fuels, rather than the future of the planet and its people. The result was a watered-down “minimum compromise” that left a vast gap between governments’ action and people’s demands and scientists’ calls for immediate and ambitious steps to save our common home.

Clearly missing was any of the ambition that will be needed to limit temperature rise to 1.5°C. Instead of enhanced funding for adaptation measures to help developing countries secure a future for the lives and livelihoods of their citizens, COP25 delivered a vague statement recalling extant commitments.

Also disappointing was the lack of progress on the Warsaw International Mechanism for Loss and Damage, which seeks to create an international fund to compensate the poorest countries for those damages they suffer due to climate change that cannot be mitigated by adaptation measures.

Agreement on carbon market rules was deferred to next year’s COP26 summit to be held in Glasgow in the U.K. Clearly, the negotiators did not grasp the urgency of protecting the planet through transformative policies to reduce carbon emissions and transition economies to clean, renewable energy.

In addition to the Holy See, which had a formal seat at the negotiation table, the Catholic presence at COP25 included Development and Peace, CIDSE, Caritas Internationalis and the Global Catholic Climate Movement. Catholic organizations were also very visible at the People’s Climate March on December 6. Behind a Spanish-language banner that read, “Catholics for the care of our common home,” a huge delegation of Catholics walked with through central Madrid with over 500,000 people demanding bold responses to the climate crisis from the negotiators. 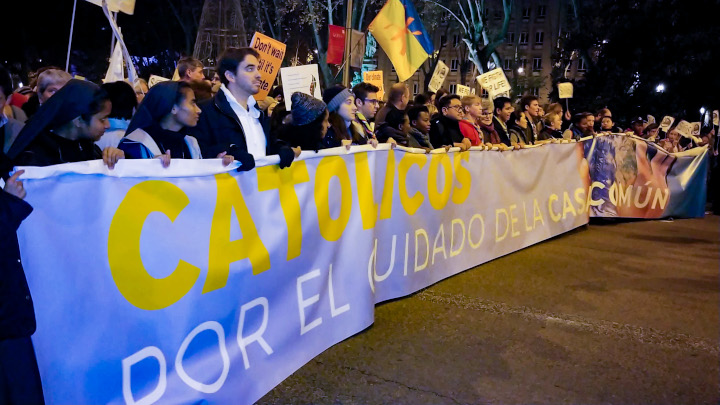 A strong contingent of Catholics joined the People’s Climate March in Madrid on December 6, 2019.

This level of Catholic interest and activism is unsurprising given the Church’s consistent championing of the climate cause, evinced by Pope Francis’s encyclical, Laudato Si’ and the Pan-Amazonian Synod. Catholics seem to be taking to heart the Pope’s call to an ecological conversion, which starts with our everyday life and continues through to our governments.

In his letter to the COP25 summit, the Holy Father asked negotiators to “listen to the science” and to “young people now filling streets all over the world.” COP25 negotiators also heard from representatives of Indigenous peoples, island nations and frontline communities, who testified to the worst impacts of climate chaos, including armed conflict, food insecurity and forced migration. Ignoring the moral imperative of tackling these problems, richer nations chose to not respect their pledges to reduce emissions; help the poorest adapt to climate change; or address losses caused by climate change.

Canada’s promise and how to ensure it is kept

Hearteningly, Canada showed some leadership at COP25. Environment and Climate Change Minister Jonathan Wilkinson committed to strengthening Canada’s Paris Agreement commitments for 2020. He promised to legislate a net-zero emissions target by 2050 with five-year interim targets and a “just transition” to phase out fossil fuel production in a way that is fair for workers and communities. He also advocated for strengthening Article 6 rules for more effective emission reductions and better safeguarding of human rights and the rights of Indigenous peoples.

Prime Minister Justin Trudeau’s mandate letters to his new cabinet further suggest that the federal government does envisage an ambitious climate strategy, which will require ambitious action from provincial governments as well.

In addition to monitoring progress on this globally important work, you can help Development and Peace support the frontline defenders of the Amazon rainforest by joining our For our Common Home campaign. It will be up to people in Canada and around the world to continue to mobilize and push governments to take real climate action.