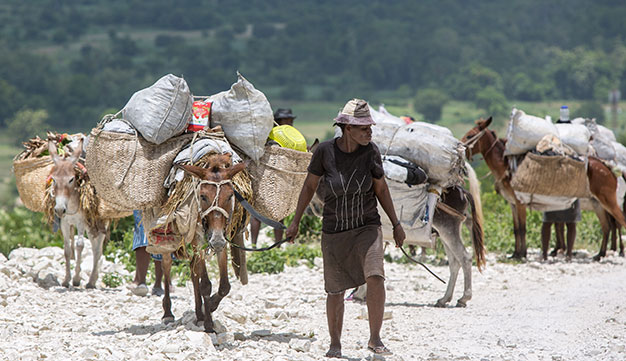 The Creole slogan, M’anvi viv tankou moun (I would like to live like a human being), on a young man’s t-shirt summarized the sentiment driving the demonstrations that have paralyzed Haiti for some five weeks now.

The slogan also captures Development and Peace — Caritas Canada’s motivation for signing on to a statement by the Concertation pour Haïti (a Quebec coalition of Haiti-focused groups). The statement (available in French only) supports calls by Haitian organizations — including our partners — for a civil society-led commission to establish a transitional government that, in the words of the Episcopal Justice and Peace Commission, changes “the way the authorities govern.”

Dysfunctional governance and rampant corruption have made the situation untenable for most Haitians. Sixty per cent of the population lives on less than US$2 per day, and 25 per cent on less than US$1 a day. Haitians’ purchasing power has been dramatically reduced by inflation, which hit 19 per cent over the summer, and by a 30 per cent decline in the value of the gourde (Haiti’s currency) over 18 months.

A scarcity of fuel is now paralyzing the country. With unreliable electricity and no diesel to run generators, public hospitals are virtually non-functional. In rural areas, farmers cannot transport produce to markets, as public tap-taps (buses) are no longer running and supermarket shelves in the cities are almost empty.

The fuel shortage is a consequence of the Haitian government’s mismanagement of petroleum products worth US$3.4 billion that it received through the Petrocaribe scheme that lets Caribbean states buy Venezuelan oil at low upfront costs with longer-term payment arrangements. The sale of these products was to finance infrastructure and development projects. Instead, a recent Haitian Senate audit found, the funds were siphoned off by government officials. President Jovenel Moïse, too, was implicated in the scam through a questionable loan to his company, Agritrans.

“Corruption and irresponsible behaviour by Haitian leaders are the direct cause of the lack of functioning of state institutions,” according to the Episcopal Justice and Peace Commission, a Development and Peace partner. “State institutions offer no services to citizens; the judicial system covers up the abuses and theft by the rich, whereas the poor rot in prisons without access to a trial.”

Mass demonstrations by the beleaguered populace have been met with violent police repression. In the last fortnight of September 2019 alone, the National Network for the Defence of Human Rights has documented the killing of 17 and the injuring of 180 protestors. The United Nations corroborated Haitian human rights organizations’ reports that implicate an elected official of the ruling party in the November 2018 massacre of more than 25 residents of the capital’s impoverished La Saline neighbourhood.

Development and Peace’s strategy in Haiti has always been to empower local social movements and civil society to advocate for their own agenda of change and development and to hold their government accountable. For our partners, the Jovenel Moïse government has lost the tenuous legitimacy it had won through an election in which only 21 per cent of the electorate participated.

It is time for the international community, including Canada, to support Haitian civil society’s efforts to turn a new page, and install a transitional government that will begin fulfilling the Episcopal Justice and Peace Commission’s demand for “change in the way the country is governed.”