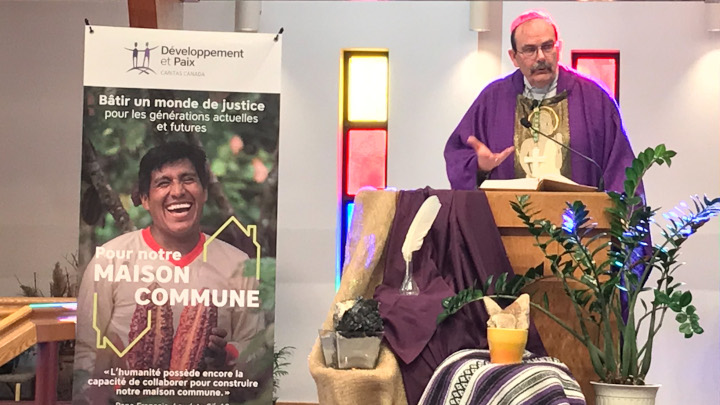 On Solidarity Sunday, March 29, 2020, the Most Reverend Albert LeGatt, DD, Archbishop of Saint Boniface, led a special mass for Development and Peace — Caritas Canada from Saints-Martyrs-Canadiens parish in Winnipeg, Man.

With COVID-19 having closed churches at a most spiritually significant time, the livestreaming of the mass attracted a large Catholic audience from across Canada. In the absence of Lenten congregations, the mass gave Development and Peace the opportunity to share the message of its For our Common Home campaign.

Opening his homily, Archbishop LeGatt said, “What times we are living in! Think of it: we have to be physically distant from one another, but we’ve never been so socially close to one another.”

Hinting at the educational material and advocacy tools offered by Development and Peace, LeGatt continued, “What does it mean in terms of action flowing out of our weeping with the poor? In terms of the Share Lent campaign… it means becoming informed… of the social situation in the Amazon. Do we act in terms of, perhaps, signing letters… to say, ‘you are not alone’?”

“And then, perhaps…, we join in that weeping so much,” His Excellency added, “that we give, and give generously, to the Share Lent campaign. Because Share Lent and Development and Peace [are] part of this family of efforts to never forget the poor, to help the poor help themselves, to help the poor rediscover dignity and strength together.”

He emphasized, “I believe that for the Catholic Church in Canada, now is not the time to abandon Development and Peace.” The virtual congregation was then led in a series of poignant, powerful prayers for the Amazon and its people.

Janelle Delorme, Development and Peace’s animator for Manitoba and Thunder Bay, closed the proceedings by inviting the audience to donate to the Share Lent campaign.

Development and Peace invites you to watch this historic Lenten mass below and thanks everyone who helped make it happen.