It was still dark when, at 5:30 am, we arrived at the Kiwele Lycée, the voting centre we were set to observe. Already, a number of people gathered at the front gate, which would only open once materials had been delivered to all 25 polling stations at the centre. The centre’s chief and staff were busy counting and distributing packets of ballots across the various rooms. Ballots for the parliamentary vote were too few, but we were told more would come later in the day.

At 7 am, our polling stations were declared open. Everywhere, hundreds of people lined up before each voting place. In Kiwele, everything indicated the process would run smoothly despite the crowds.

Voters stand in line before a polling station, at approximately 10 am. Throughout the day, long lineups could be observed at all the voting centres we visited, an indication of the electors’ determination to exercise their right to vote.

The same could not be said elsewhere. At around 10 am, we undertook to visit other voting centres, only to realize that some polling stations, and in some cases entire voting centres, had not yet opened. Some were missing a ballot box or a polling booth, while others simply did not have ballots. At times, the designated site was not large enough to accommodate the planned number of polling stations. Such was the case at a voting centre near the Katuba district, where tents were set up some time before noon. Our partners, also observers, reported that some voting centres opened as late as 4 pm, allowing voters in until 1 am. Normally, polling stations should be opened for a total of 11 hours.

Near Katuba, the CÉNI had planned for 30 polling stations. With only 20 classrooms available,  makeshift voting centres were set up. Tents only arrived late morning, causing important delays in opening the polls. Here, two polling stations are crowded under a single tent, making it nearly impossible to position the booths in a way that ensures secret voting. Many unhappy electors told us they feared not being able to vote.

Uncertainty
Around mid-afternoon, a polling station was attacked, sending a wave of panic through Lubumbashi. According to local sources, three people were killed. RCK had to shut down for security reasons. We retreated to the Mother House, maintaining contact with other delegations of international observers and local partners. Some international delegations were ordered back to their hotel, while others pondered whether to keep on observing. Thanks to our network of partners, we were able to make an informed decision: since calm had been restored, we went back to Kiwele to observe the counting of ballots at designated polls.

Counting the ballots
At 10 pm, a member of our delegation in Kassenga phoned to wish us… good night. There, ballot counting had just finished, whereas at our voting stations, the process was just starting. In Lubumbashi, some polls closed as late as 1 am. Still, at that moment, we never dreamed that election workers would still be on hand at 1 pm the next day. In Lubumbashi, more than 600 candidates ran in the parliamentary elections. With ballots as thick as the Saturday paper, getting the results out was quite a challenge! 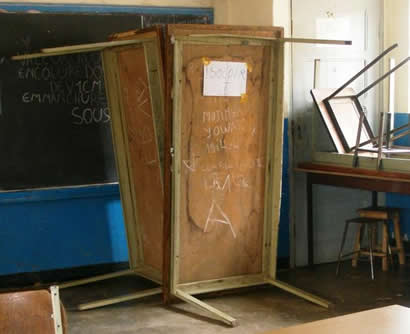 In some polling stations, the scarcity of materials forced election workers to improvise. Here, a polling booth was created out of tables, when the booths provided by the CÉNI (Independent National Electoral Commission) failed to arrive. Some centres were even missing ballots or ballot boxes, making it impossible to vote. Some things are more essential than others!