While traveling in Myanmar and Bangladesh from November 30 to December 2, Pope Francis met with Rohingya children, women and men. Here is an account of his visit.

On December 1st, Pope Francis met with a group of Rohingya refugees in Bangladesh during his recent trip to this part of Asia. Sixteen refugees travelled to Dhaka from Cox’s Bazar, where they live in huge camps. Some 630,000 Rohingya refugees have fled Myanmar since August.

“I knew that I would meet the Rohingya, I didn’t know where or how,” said Pope Francis. “What Bangladesh is doing for them is big, an example of welcoming.” Development and Peace – Caritas Canada and Caritas Bangladesh are working together in the refugee camps providing aid. Caritas Bangladesh’s James Gomes accompanied refugees from Cox’s Bazar to meet Pope Francis. He told us about his experience: 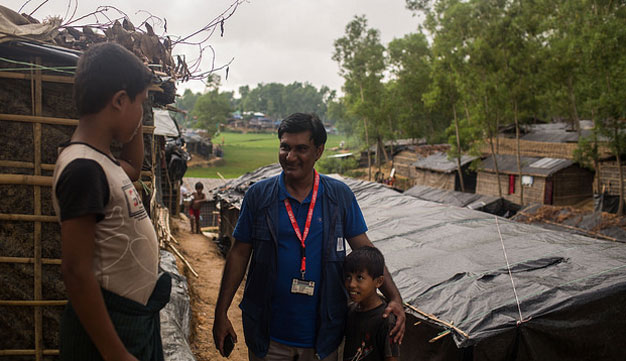 “We started the journey very early and arrived in Dhaka tired. We – the Rohingyas and the people accompanying them – got a lot of attention. The organizers were very supportive and caring.

“The first part of the event was an interreligious prayer followed by a moving, hard to forget message from Pope Francis. After that, Pope Francis had a chat with Rohingya families and later with individuals. He wanted to know firsthand what happened to them in Myanmar.

“One of those he spoke with was Swakat Ara, an orphan. She is 12 years old. She lost her parents and two brothers. One uncle brought her to Bangladesh after a nine-day walk. The uncle was injured by bullets. She is staying with him and his family.

“She cried when she spoke to Pope Francis as she described how her house was burnt, and she lost her family, and how long she had waited until she realized her uncle was alive. When she arrived in Bangladesh, she told the Pope, she was tired and hungry –no food for three days. She was longing for her parents and brothers.

“‘I bear with me whatever you share with me,’ said Pope Francis. He asked them for forgiveness and offered them his prayers.

“The Rohingya do not know who the Pope is. They learned that he is a man of peace and an advocate for human rights. They appeared moved by his words. Certainly, the lives of the 16 refugees who met with Pope Francis in Dhaka will not be the same.

“The papal visit may contribute to the Rohingya having their rights respected and getting citizenship, which will allow them to go back home, a home where they are accepted, have rights and their children are protected. Then Rohingya may be willing to forgive. 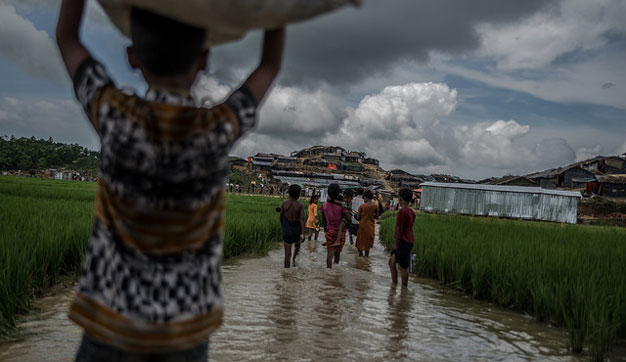 Rohingya refugees walk through the flooded Balukhali camp in Bangladesh, one of the areas where Development and Peace is providing aid. Photo by Aurélie Marrier d’Unienville/Caritas

“The crisis has just begun. In three months, 630,000 people arrived in Bangladesh, a poor, densely populated country. Imagine a city the size of Genoa rising from scratch in three months. Refugees need everything. They need food, a roof over their heads, playgrounds for the children, ways to keep youth occupied, jobs, you name it.

“An Irish priest had joined us on a visit to the camps. He said his heart was broken, he had never seen such suffering – and such resilience. The children smiled and invented games and toys to play. That seems to be the main challenge: allowing the children to play and have a future.

“I never thought of meeting the Pope – and certainly not under such circumstances. I was concentrated on the assignment: to make sure the refugees meet Pope Francis. I was tense and thought, what will happen if I fail?

“As interpreter, I got the opportunity to build a bridge – and to let the refugees advocate for themselves. It is not the same, and never will be, to talk about the Rohingyas compared to talking with the Rohingyas. And Pope Francis talked to the Rohingyas.”

Development and Peace – Caritas Canada and Caritas Bangladesh are providing aid in Cox’s Bazaar, where they are distributing food to 25,000 refugees. Thanks to the generosity of Canadians who answered our call for donations, we will be able to continue our actions in Cox’s Bazaar over the coming months. We will be able to respond to water, sanitation and hygiene needs, as well as provide temporary shelters, food and other items, and strengthen protection for women and children, who are particularly vulnerable.