The government of Canada recently announced that it rejected the construction of the Northern Gateway pipeline, which would have cut through the protected forests in British Columbia, but approved two other pipelines, including the controversial Transmountain-Kinder Morgan project, despite staunch opposition by Indigenous communities and municipalities on whose land these pipelines will traverse. In addition, these projects run counter to the government’s commitment to the Paris Agreement to reduce GHG emissions by 2030.

This announcement comes on the heels of the ongoing protest at Standing Rock, an Indigenous reservation of the Dakota Sioux people, to oppose the Dakota Access Pipeline project, which would threaten their land and water sources. The pipeline was re-routed through the reservation in 2014 when the original plan was rejected due to a failed environmental assessment.

Indigenous communities from all over North America and the world have traveled to support the Sioux in their role as protectors of land and water. As the January 2017 deadline to complete the project approaches, actions against by the police, army and security forces of the company building the pipeline against those gathered have grown increasingly violent. Tear gas, attack dogs, rubber bullets, pepper spray and water cannons in freezing temperatures have all been used against those present. In addition, over 500 people have been arrested for protesting.

Thanks to the growing awareness of the harmful environmental impacts in the face of climate change generated by these types of projects, and the violation of Indigenous rights that often takes place around them, there is a worldwide movement to halt this type of destructive development focused on non-renewable resources. Companies, however, are pushing back with force, and as a consequence, environmental defenders are increasingly criminalized and are having their lives threatened, particularly in Latin America. However, the recent events at Standing Rock are a worrisome sign that this trend is spreading.

Development and Peace extends its solidarity to the Water Protectors of Standing Rock, whose courage in the face of human rights violations and repressive acts must inspire us all to be defenders of our Common Home.

Pope Francis reminds of this role that must now inhabit us all in his encyclical Laudato Si’, and during a speech to popular movements in Bolivia in July 2015, he re-iterated, how we must all, like our sisters and brothers at Standing Rock, be protectors of Mother Earth:

“Our common home is being pillaged, laid waste and harmed with impunity. Cowardice in defending it is a grave sin. We see with growing disappointment how one international summit after another takes place without any significant result. There exists a clear, definite and pressing ethical imperative to implement what has not yet been done. We cannot allow certain interests – interests which are global but not universal – to take over, to dominate states and international organizations, and to continue destroying creation. People and their movements are called to cry out, to mobilize and to demand – peacefully, but firmly – that appropriate and urgently-needed measures be taken. I ask you, in the name of God, to defend Mother Earth.” 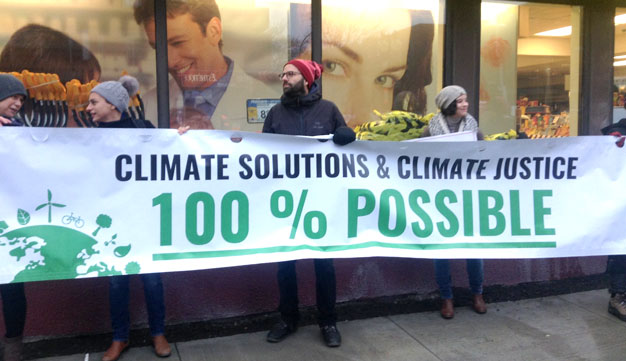 Canada must respect Indigenous rights and its climate change commitments

In light of the decision taken by the Canadian government, protests have already begun in Vancouver, where the Transmountain-Kinder Morgan pipeline will pass, and across Canada.

The science is clear that if humanity is to avoid the devastating economic and environmental impacts of climate change, two-thirds of oil reserves must stay below ground. The construction of these pipelines, however, will only foster further exploitation of the tar sands. Already climate change is negatively affecting the poorest and most vulnerable in the Global South, and this will only worsen if decisive action is not taken now.

If the Canadian government wants to retain the promising leadership that it showed at the UN climate talks, and its pledge to respect Indigenous rights, it must take decisions that reflect the Paris Agreement, which was ratified in the House of Commons in October, and its adherence to the UN Declaration of Rights of Indigenous Peoples. By rejecting the Northern Gateway project, it has shown that it is willing and capable to consult, listen and respect those who are most affected, and it must apply this same rigor to other projects.

It must also support provinces, particularly those whose economies are mainly based on fossil fuels, in a just transition towards an economy based on renewable energies.

Development and Peace would like to re-iterate the commitments that it asked the Canadian government to make during the COP21 climate negotiations in Paris: