After five years of providing humanitarian aid to Syrians, whose country is being destroyed by violent conflict, Development and Peace added to its response by launching an advocacy campaign in the spring of 2016. Since then, the Canadian government, with the leadership of Foreign Affairs Minister Stéphane Dion, has taken action on our campaign demands.

Our campaign called on the Canadian government to:

These demands were based on input from our partners on the most important problems they face and reflect the work they are doing to bring about peace and enable Syrians to live in dignity. As part of this campaign, we published a document called Five Years of Conflict in Syria: Working for Peace and Dignity for Syrians, and we invited Elias Sadkni, co-founder of our partner organization House of Peace, to speak to several Members of Parliament who are members of the Foreign Affairs Committee about the many challenges facing Syrians. We also sent a letter to the Prime Minister and asked Canadians to sign a petition with our campaign demands.

Since then, Foreign Affairs Minister Stéphane Dion and the Canadian government have shown leadership and taken action on all three of our campaign demands, beginning when Canada joined the International Syria Support Group (ISSG). Joining this group was a first step for Canada in contributing towards a diplomatic solution to the crisis, which is what Development and Peace was asking for in its Syria campaign.

Development and Peace has joined 223 organizations from 5 continents and 73 countries in signing a global civil society declaration, which calls on UN Member States to support this call for a UN General Assembly special session proposed by our own Canadian government.

Also in November, the Government of Canada again showed its commitment to resolving this crisis diplomatically by hosting a meeting of special envoys from 15 countries, along with representatives of Syrian civil society, the Syrian political opposition, and the United Nations, to discuss steps towards peace in Syria. This event, co-hosted by the Netherlands, took place in Mont-Tremblant, Quebec, from November 11 to 13, 2016.

What is especially striking about this event is that Canada invited representatives of Syrian civil society and the opposition to the discussions; they have not always been included in allies’ meetings on the conflict in Syria. Minister Dion also held meetings with these representatives to hear their proposals for accelerating the cessation of hostilities. This is exactly the kind of action Development and Peace proposed in a policy position it published this summer, called A Peace Process for and with Syrians: How Canada Can Ensure a Lasting Peace in Syria.”
This policy proposal provided a detailed analysis of how Syrian civil society, and especially Syrian women’s organizations, can contribute to the peace process, and recommendations for the Canadian government on actions they should take to achieve this objective, since civil society engagement in peace processes has proven to ensure a more sustainable peace. 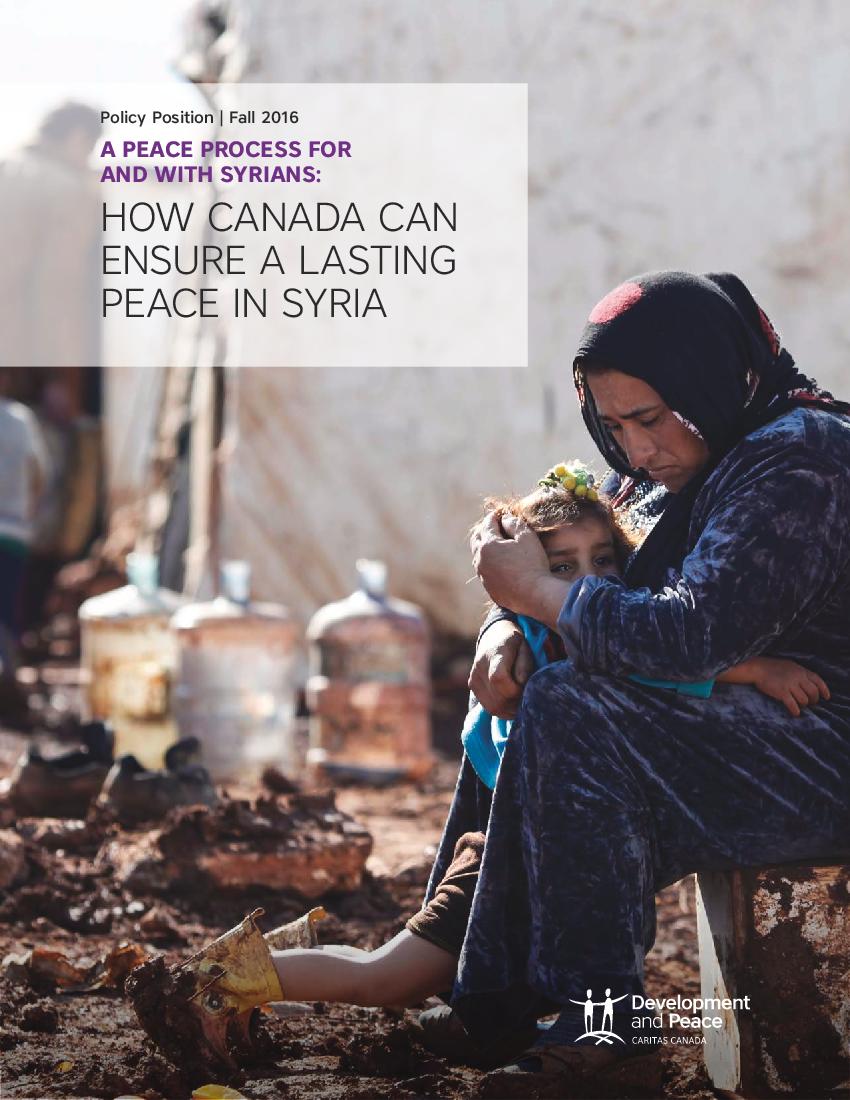 In remarks at the Mont-Tremblant meeting, Minister Dion referred to the root causes of the conflict, including the “democratic deficit and the struggle for rights” in Syria, the effect of droughts on food prices, and he highlighted the fact that climate change can have concrete effects on security, among other things, in the world. At Development and Peace, we focus on tackling the root causes of injustice and violence, so it is gratifying to see that our Minister of Foreign Affairs is articulating this approach in his response to the Syrian crisis and is taking action that reflects our advocacy demands.