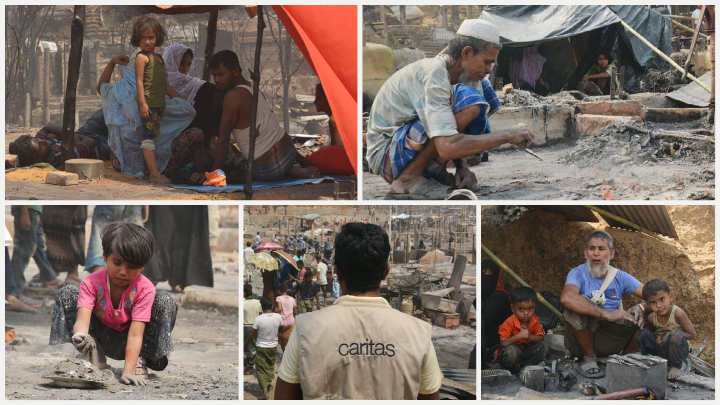 At about 3:30 p.m. local time on Monday, March 22, 2021, a fire broke out it the Balukhali section of the Kutupalong Rohingya refugee camp in Cox’s Bazar, Bangladesh. Feeding on the densely packed bamboo-and-tarpaulin shelters of the world’s largest refugee camp, the blaze spread quickly and was not contained until nearly midnight.

Our partner, Caritas Bangladesh, swung into action right away. In a video recorded on the site at noon on March 23, Inmanuel Chayan Biswas, head of operation for Caritas Bangladesh’s local emergency response program, reported, “More than 5,000 houses and shelters have burned away. Many have lost their life’s belongings. Now, they are struggling to have food to eat.”

Assessments conducted since that video was recorded indicate that at least 15 people have died and some 400 are missing. The shelters of over 17,000 households have been destroyed. Most of the nearly 88,000 affected people have moved to neighbouring sections of the camp to seek shelter with relatives. Biswas fears the resultant overcrowding could cause a spike in COVID-19 cases, which were already trending upward.

Stepping up to help

Caritas Bangladesh has constituted three emergency response teams to conduct a detailed needs assessment and to provide emergency assistance. These teams are also coordinating with other aid agencies and government officials.

Contingency stocks of relief supplies are being readied and work is underway to register affected families so that food, non-food items and emergency shelter kits can be distributed efficiently. Given its expertise in shelter rehabilitation, Caritas Bangladesh now anticipates contributing mainly to the joint civil society reconstruction effort.

“I am sharing this message all the way from the Rohingya camp in Bangladesh, asking [for] your support for this critical response,” Biswas said, highlighting the additional need for resources that this latest crisis in the lives of a long-suffering people has created.

It is hoped that this fire, the second in three months, will draw attention to the issue of the sustainability of the camps and the complexities of the Rohingya refugee crisis.

so our partners can help the
Rohingya refugees recover from the ravages of the fire.