Two years ago, Brazil experienced the worst environmental disaster in its history when a dam holding back iron tailings from the Samarco mine burst. The released mud ripped through several villages in the district of Mariana and dumped 60 million cubic metres of iron waste into the Doce, Gualaxo do Norte and Carmo rivers. The impacts experienced by communities were horrific, and included the deaths of 19 people, the destruction of houses and infrastructure, and the contamination of water sources which ruined the livelihoods of fisherfolk and continues to cause health issues. 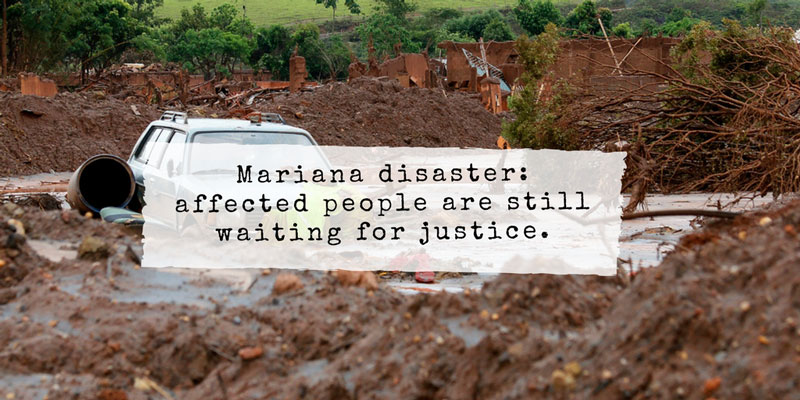 A tragedy caused by corporate negligence

The Samarco mine is a joint venture between Brazilian company Vale and British BHP Billiton. In March 2016, Samarco, Vale and BHP Billiton Brazil Ltda. signed an agreement with Brazilian authorities to “remediate and compensate for the impacts caused by the bursting of the dam.” This agreement was widely condemned by civil society, including Development and Peace partner the Movement of Dam-Affected Peoples (MAB).

Thiago da Silva, a coordinator with the MAB explains why:

“The accident was a criminal tragedy, resulting from negligence on the part of the Brazilian state and the greed of the mining company. Who is coordinating the process? The criminal mining company. There’s something wrong here. The families have the right to be involved in this. This is fundamental. The idea of an agreement is not fundamentally wrong. What we’re asking is: where are those affected?”

CIDSE, a network of Catholic international social justice organizations that includes Development and Peace, has developed an online multimedia dossier that takes you on an interactive journey through Mariana. Photos, videos and testimonials immerse you in the experience of the communities that lost everything and their struggle for justice in the face of powerful corporations.

The failure of Samarco’s dam is not an isolated case. Here in Canada, the Secwepemc people of British Colombia continue to await justice after the breach of a dam at the Mount Polley mining site in 2014 that released 25 million cubic metres of mine tailings, comprised of copper, arsenic and other mine processing chemicals, into Quesnel Lake and Hazeltine Creek. Quesnel Lake is the incubator to 25 percent of the province’s endangered wild salmon and a sacred place of birth for the Secwepemc people. 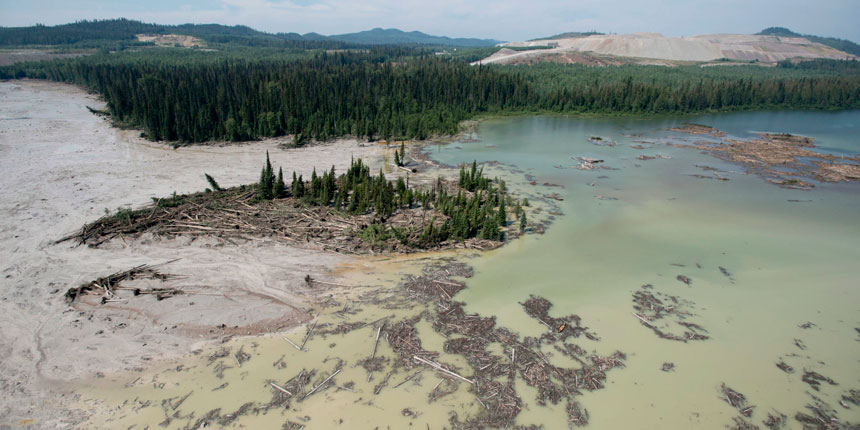 In May 2016, the Auditor General of British Colombia released a scathing report into the ‘decade of neglect’ of the mining sector in BC and blamed the Ministry of Energy and Mines (MEM) for a culture of weak oversight and compliance enforcement which contributed to the disaster. The Auditor General noted that MEM’s dual role of mining promoter and regulator puts it in an “irreconcilable conflict” in terms of protecting the environment from harm and recommended that MEM move compliance enforcement to a unit outside the Ministry. The government rejected the recommendation and continues to operate in the same way.

A criminal investigation into the disaster by the Conservation Officer Service, RCMP, and Fisheries and Oceans Canada is underway, but three years on, the company has not faced charges or fines. On June 23, 2016, the mine resumed full operations despite the outstanding criminal investigation and lack of a long-term water management plan. Indigenous peoples have not received any reparations for their losses from any level of the Canadian government. Instead, several Indigenous nations have been forced to file costly lawsuits in British Columbia’s Supreme Court. The outcomes of those court cases are many years away.

For the last ten years, Development and Peace has been working with the Canadian Network of Corporate Accountability to call on the Canadian government to create a human rights ombudsperson for the international extractive sector in Canada. The need for an independent and effective ombudsperson who can investigate and make recommendations emerged after many communities in the Global South gave testimonials regarding human rights violations by Canadian-owned mining companies. Close to 75 percent of the world’s mining and exploration companies are listed on Canadian stock exchanges, and Canada has a responsibility to ensure that these companies respect international human rights and environmental laws.

The current Liberal Government, elected in October 2015, included in its electoral platform the creation of an ombudsperson, however, the creation of this office has yet to be announced.

At the international level, there are also steps being taken so that States perform their due diligence in ensuring that transnational corporations based in their countries respect human rights regardless of where they are operating. On June 25th, 2014, the UN Human Rights Council in Geneva adopted a resolution on the elaboration of an international legally-binding instrument on transnational corporations and other business enterprises with respect to human rights, referred to as the “UN Treaty.”

The UN Resolution called for the establishment of an Intergovernmental Working Group (IGWG) with the mandate to elaborate the Treaty. The last session of the IGWG was held from October 23-27, 2017 where negotiations began on the content of the treaty.

Despite growing momentum for the UN Treaty, including from the European Union, Canada has not engaged in any of the IGWG sessions. Rather, Canada continues to support the UN Guiding Principles on Business and Human Rights, which although instructive in terms of best practices, is not binding.

In our globalized world, the toxic legacies left by both Mariana and Mount Polley show the urgent need for higher standards of accountability from corporations at all levels. Otherwise, it will simply be a matter of time until the next disaster.