What do we want? Climate justice now!

That was the rallying cry that was heard all though Paris on December 12th, when climate justice activists from around the world converged at noon on the Champs Elysees to show that even if the COP21 climate negotiations have come to a close, the struggle for climate justice is not about to end - rather it is gaining force. Participants formed red lines to represent the threshold that can’t be crossed if the planet and humanity are to survive. Thousands gathered, forming a peaceful sea of red. The crowd then moved towards the Eiffel Tower, where a human chain encircled the historic monument. Chants of “Three degrees is a crime against humanity” could be heard throughout the crowd, signifying the failure of world leaders to come to a consensus on limiting the temperature rise to below 2 degrees Celsius. National contributions for reducing greenhouse gas emissions, when added up, might manage to keep us below 3 degrees, but this is insufficient from preventing climate disasters and some island nations from disappearing completely if we remain on the same path.

When the cry “We are unstoppable, another world is possible,” was launched, it felt like it was being sung from across the world. It is a message that belongs to all those, including our members and supporters, who took part in the incredible mass mobilization that happened in the lead-up to the COP21. It showed world leaders that climate justice matters to their citizens, and they had no choice but to listen and to continue to listen. We are unstoppable and another world is possible, as long as we are together!

Development and Peace at the December 12th Paris mobilization for climate justice:

Find pictures of the mobilization and more in this Flickr album: 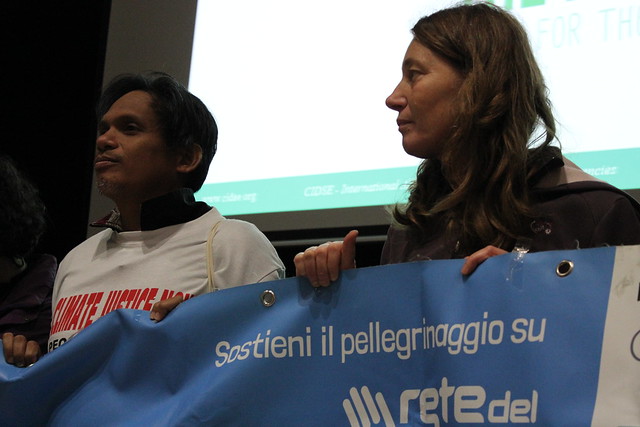 Voices from the Global South at the COP21
Read more