After a decade of mobilizing for the creation of the Canadian Ombudsperson for Responsible Enterprise (CORE), and  waiting another 15 months for the position to be filled, Canadians were finally able to hear from ombudsperson Sheri Meyerhoffer on Tuesday, September 10th, 2019, at an event organized by new Centre Oblat – A Voice for Justice and St. Paul’s University in Ottawa. 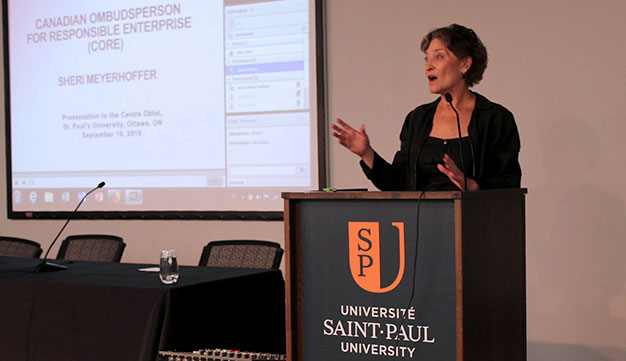 A University of Saskatchewan law graduate, Sheri Meyerhoffer previously worked as Head of Mission for the International Institute for Democracy and Electoral Assistance in Nepal, and before that, had worked as a lobbyist and consultant with the oil and gas industry in Alberta.

While the extent of her mandate has been unclear, including whether she will have the power to compel testimony and documents in her investigations, Sheri Meyerhoffer expressed a commitment to transparency and to regular reporting on her work, which she stated will include investigating human rights abuses related to the environment, labour rights, and health and safety arising from the activities of Canadian companies overseas, and recommending remedies. She unveiled the structure of the Office, which will include 8 staff, plus interns and consultants for specialized work.  She stated that she has the power to investigate cases whether there has been an official complaint or not. She promised that she “will continue to advocate strenuously to the minister” to bestow the office with the power to order those under investigation to produce documents and testimony under oath, which would enable more fair and thorough investigations. At the moment, the ombudsperson’s responsibilities cover Canadian companies operating in the mining, oil, gas, and garment industries abroad, but the government has announced that the office will expand its responsibilities to other industries within a year.

Following the presentation by Ms. Meyerhoffer, a panel, featuring Elana Wright from Development and Peace – Caritas Canada, David Clarry from Hudbay Minerals, and Professor Philippe Dufort from St. Paul’s University, responded to the presentation with their varied perspectives on whether Canada has raised the bar in terms of respect for human rights and the extractive industry with the creation of this new office.

Professor Dufort provided insight into the asymmetrical power dynamics between multinational corporations and impacted communities of Indigenous peoples or peasants. He also went into detail on Canada’s involvement and influence on certain foreign mining codes in Latin America.

David Clarry, Vice President, Corporate Social Responsibility at Hudbay Minerals, represented the Mining Association of Canada (MAC) on the panel, and he presented the voluntary guidelines that MAC has developed, and discussed Canada’s corporate presence in mining around the world.

Elana Wright, Research and Advocacy Officer at Development and Peace, discussed the leadership of Pope Francis and the Church on mining justice, and shared details on the persistent and committed lobbying done by Development and Peace members, civil society organizations, unions, social movements and partners around the world, and their reactions so far to the creation of the ombudsperson office.

Expectations for Sheri Meyerhoffer’s role are very high, both from Canadians who have been asking for the ombudsperson, but also from communities and social justice organizations based in mining-affected regions around the world. The new ombudsperson was named after over a decade of calls for a voice for justice for communities facing environmental damage, violence, and forced displacement as a result of the operations of Canadian mining companies.

Development and Peace, along with other organizations here in Canada and around the world, were disappointed in the government’s choice not to fulfill their promise to ensure independence and a mandate with strong investigatory powers for this office. After years of mobilization here in Canada and around the world, the current ombudsperson’s mandate is not considered to be even a significant improvement than the previous Corporate Social Responsibility (CSR) Counsellor, which had been widely critiqued for ineffectiveness.

In June 2019, Elana Wright, Development and Peace’s representative on the Multi-Stakeholder Advisory Body (MSAB), which was created by the government at the same time as the CORE, resigned in protest along with all other civil society and union representatives.

Also on September 10th, Development and Peace received a letter sent directly from Minister Carr, stating that a revised, stronger Order-In-Council had been adopted, and that he had begun the process of enacting “a stand-alone legal framework for the office, including stipulating its power to compel documents, witnesses, and other key testimony.” However, it seems unlikely that this new promise would be fulfilled before the Federal elections on October 21st, and it does not address the fact that the CORE is not independent, but rather has been appointed as a public servant, reporting to the Minister of International Trade Diversification.

It has yet to be seen whether the new ombudsperson will be able to ensure companies respect human rights in their overseas operations, and whether Canada will be a leader or a laggard on corporate accountability.