The World Social Forum (WSF) is an important space to build convergence among social movements and organizations of different countries, to dialogue and exchange experiences. The Movimento dos Atingidos por Barragens (MAB) is a Brazilian social movement of people affected by dams, and it sent delegates to participate in the WSF in Montreal, which had as its slogan, Another world is necessary and possible. While there, we gained an understanding of the importance for convergence to overcome the social crisis that we are living in – the result of the capitalist crisis – and to denounce human rights violations.

During the Forum, we participated in roundtables, convergence assemblies and meetings. We discussed with several countries the Latin American context of coup d’état, as those we are facing in Brazil and Honduras, and which is resulting in the removal of labour and environmental rights. The MAB and Development and Peace helped co-organize with other organizations four workshops: Resisting Mining Transnationals through Global Networks; From Marikana to Mariana: How to Face Mining Crimes?; The Mariana Case and the Destruction of the Doce River Basin; and Tailings Dam Spills in British Columbia and Brazil: “Accidents” or “Environmental Crimes”? In the latter, participants debated the Mariana mining disaster that was committed by the extractive companies Vale and BHP Billiton and contaminated the Doce river basin, making it the biggest socio-environmental crime to occur in Brazil, as well as the tailings dam spill that occurred just 14 months prior at the Imperial Metals-owned Mount Polley mine, and is the biggest spill of its kind in Canadian history.

For us (the MAB), the WSF was also an important channel to debate the project of Belo Sun to build the largest open ore mine pit near the Belo Monte dam in Brazil, the human rights violations experienced by people affected by a dam managed by Brookfield and to exchange experiences and contacts with Canadian mining workers, Indigenous communities struggling with mining and oil projects in their territories and other social organizations of different countries. 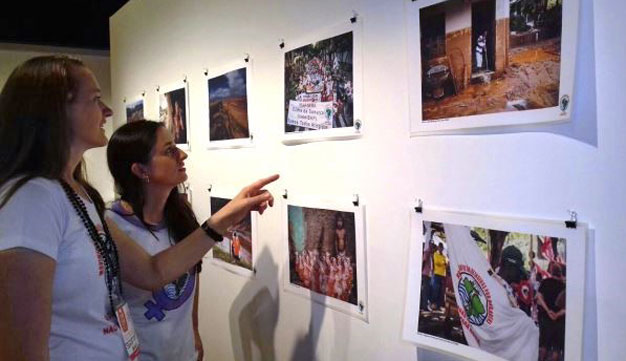 In parallel with the activities of the WSF, we also exhibited 41 photographs of Vale’s crime at Mariana at the Montreal Arts Interculturels to denounce the damage caused by the burst tailings dam and to illustrate the struggle of those affected. On November 5th, it will be one year since the dam burst, and MAB is organizing an important event in Mariana. During the WSF, we had the opportunity to invite several organizations to participate in this important activity that will include people affected by dams from different regions of Brazil, as well as mining and energy workers.

Unfortunately, we were prepared to go to the WSF with a total of five delegates but three of them had their visas denied, along with more than 200 other delegates from the Global South. Even so we have been able to build important connections and come back to Brazil with a very good evaluation of the work done in Montreal and with renewed hopes for the next period.