The commitment of Development and Peace members was highlighted a number of times this year. Their devotion is a key ingredient of our success. Here are three people who have stood out for their exceptional energy and enthusiasm. 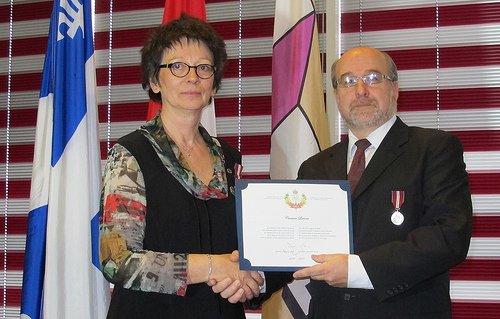 Carmen Lanoue has been a committed member of Development and Peace since 1999. An active Sainte-Dorothée parishioner, she also participates in the Conseil diocésain de Montréal (Montreal Diocesean Council) and coordinates the Laval regional table of Development and Peace. On February 2, 2013, Carmen received the Queen Elizabeth II Diamond Jubilee Medal in recognition of her community involvement as a member of our organization. “Every fall, we prepare campaigns to educate the local public concerning practices that contribute to the misery of people from the Global South and propose concrete initiatives (petitions, meetings with elected representatives, reflections on our way of life, etc.) that help change situations of social, economic and ecological injustice. In winter, we organize fund-raising activities to support projects initiated by the organization’s partners, during the Share Lent campaign,” Carmen explains.

In 2002, Carmen participated in an internship organized by Development and Peace in Bolivia and was thus able to meet nine local partners working in the countryside and in poor neighbourhoods of large cities. “There is so much injustice in the world of which we’re unaware. Through my involvement with Development and Peace, I’m learning every day about the horrors of a system in which only profit matters, and I’m seeing the nobility of those who courageously bolster the dignity of the most impoverished and help them take back control over their own lives. Each and every one of us has to pay attention and not be afraid to remind our communities and our elected representatives that life and people come before profit!” 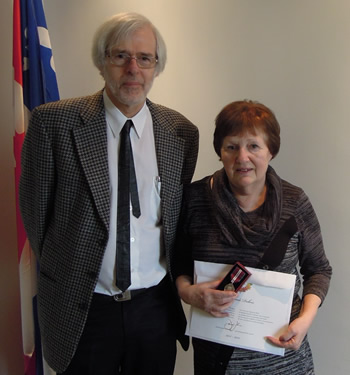 On Friday, February 22, 2013, the Queen Elizabeth II Diamond Jubilee Medal presentation ceremony was held at the Laurier / Sainte-Marie riding office. One of the nine recipients, Raymonde Dubois, received the decoration from the member of parliament, Hélène Laverdière. A committed member of Development and Peace for over 35 years, Ms. Dubois has been the diocesan coordinator of the Share Lent campaign for the Montreal archdiocese for over 10 years.

The recognition of her contribution to society also encompasses her involvement in the Society of St. Vincent de Paul’s Sacred Heart Conference and her creation of the Épicerie Solidaire Chez Rosalie (Rosalie’s solidarity grocery store), an innovative project she initiated with her grandson, Jean-Philippe Dubois, a little over two years ago. The grocery store is intended for 12 or so neighbourhood families of modest means who have made a pledge to start getting back on their feet; the families belong to the store for one year or more, if necessary, during which time all of their members receive energetic guidance and support enabling them to move forward as a cohesive family unit. 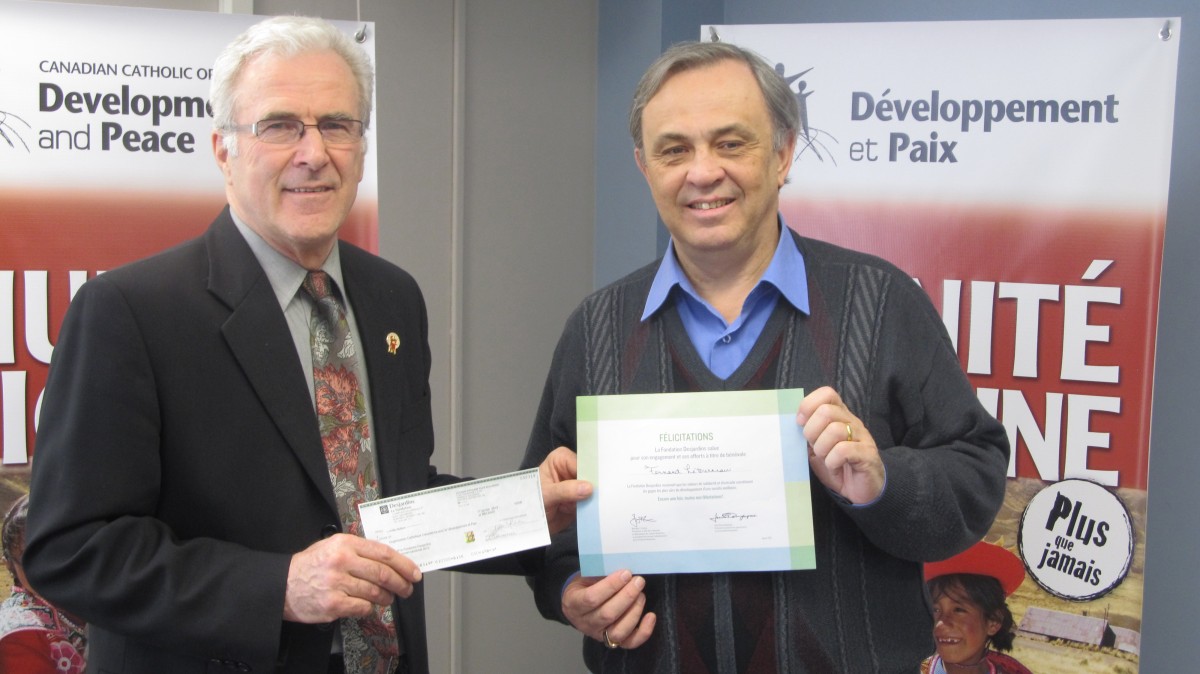 On December 27, 2012, Fernand Letourneau, a volunteer with Development and Peace for over 25 years, received a Fondation Desjardins Prize – Volunteer Involvement at the regional level. One of his greatest sources of pride is “to have had the good fortune to work for all these years with a group of like-minded people, sharing a perspective on how to provide concrete assistance for those in need.”

Over the years, in addition to annual campaigns, Mr. Létourneau has also coordinated various special activities that have helped raise several thousands of dollars. One such activity, the Fête des Nations (festival of nations), has been held in Brossard on four separate occasions. It celebrates the city’s cultural diversity, while serving as a fundraiser for Development and Peace. Brossard officials now renew the event on an annual basis.

He was awarded a tribute-certificate in recognition of his volunteer involvement, along with a cheque for $1,000, paid to Development and Peace.

Our warmest congratulations to Carmen, Raymonde and Fernand!
The Development and Peace team