“This camp is a cry to the whole world for a better politics based on compassion and solidarity,” said Cardinal Luis Antonio Tagle, president of Caritas Internationalis, while visiting refugee camps in Cox’s Bazar in Bangladesh on December 3rd and 4th. He saw how the Caritas family, including Development and Peace – Caritas Canada, is helping provide vital shelter, water, sanitation and hygiene, living supplies and protection assistance to people fleeing brutal repression in Burma. Watch Cardinal Tagle’s message from the camp:

Since August 2017, widespread violence in Burma’s Rakhine State has caused 700,000 Rohingya people to flee to Bangladesh, bringing the total Rohingya population there to nearly one million. Cardinal Tagle spoke to several families at Kutupalong camp, the largest of the 30 refugee camps in Cox’s Bazar. He visited aid distribution points, child-friendly spaces and model houses set up by Caritas.

“It’s one thing to see reports and read articles, but another to come here and see and touch,” said the cardinal. “Part of me is sad that humanity keeps allowing suffering like this. When will we learn our lessons and be able to stop a crisis of this magnitude from happening again? How as an international community and a human family can we get back to the basics of dignity, care and compassion,” he said. Cardinal Tagle also said, however, that his visit had given him fresh hope. Caritas Bangladesh with support from Development and Peace – Caritas Canada and other organizations within our network has helped nearly 500,000 Rohingya refugees since the crisis began. Examples of this aid include: 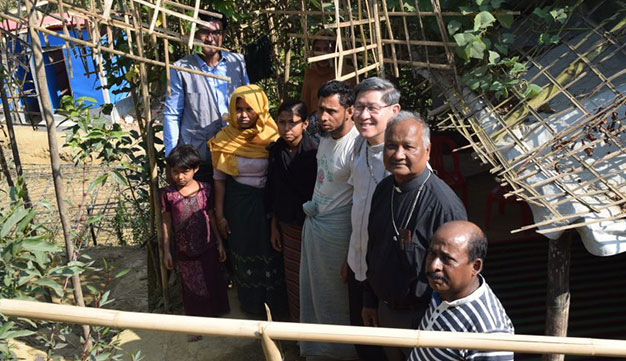 “What I see here right now is human suffering, but I see also the hope that the Caritas confederation brings to people,” he said. “They are doing all they can with sparse resources to reaffirm the dignity of others. Caritas Bangladesh, a small Caritas within our family, is doing excellent work but it is only possible with the collaboration of many other Caritas organizations.”

The cardinal was accompanied by Archbishop Moses Costa of Chattogram and Bishop Gervas Rozario of Rajshahi, who is the President of Caritas Bangladesh.

“The situation of refugees from Burma was heartbreaking for me when I came first, but I’m seeing things improve,” said the archbishop, whose diocese includes the area of the camps. “We wish for a permanent solution for these people who are stateless and helpless. It is our responsibility to be with them. We want them to have a happy life.”

Cardinal Tagle has been leading the global Share the Journey campaign for refugees and migrants. “The purpose of Share the Journey is simple: to develop a culture of personal encounter with the many forced migrants, refugees, and displaced people in the world, including the victims of human trafficking, exploitation and new forms of slavery,” he said.

“That’s why I’m here in Bangladesh – to listen to people forced from their home. If we do that we might realize that their stories are our stories, their dreams are our dreams, their suffering is our suffering. We share a common path.”

Find out more about the Share the Journey campaign.

Advent is a period of waiting

The trip came one year after Pope Francis visited Bangladesh and Burma with a message of dialogue and peace. “Here I am this first week of Advent with a people waiting for a future,” said Cardinal Tagle. “For us Advent is waiting not for something but for someone: Jesus, who was born poor, who became a refugee but who never stops loving. I hope this message coming from this camp will encourage all of us never to get tired of loving.”

This Christmas,
Donate to Development and Peace – Caritas Canada