Kelly Di Domenico and Guy Des Aulniers, Emergency Relief Programs Officer, are currently in Niger, one of the hardest-hit countries in the food crisis which is sweeping across West Africa. Our team is also in the company of three journalists from Salt and Light Television, who have traveled to witness first-hand, the situation and the emergency relief programs we are supporting in the country, in collaboration with the Canadian Food Grains Bank (CFGB).

The team arrived in Niger on July 23rd and will visit a number of humanitarian projects being implemented by local partner, CADEV (Caritas Niger), including refugee camps, food distribution sites and agricultural relief projects. They will meet and speak with beneficiaries and local leaders and share their stories with us, so we can help others to better understand the scope of the current crisis and what we can do about it. 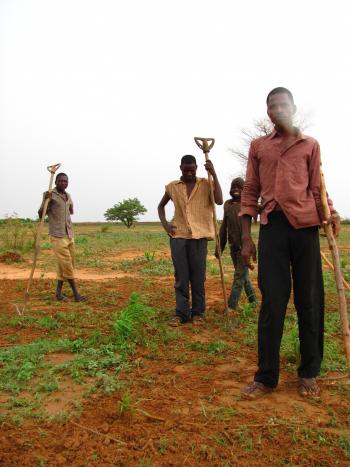 Niger is one of those countries that seems forgotten on the map, a place at the edge of the world that feels like it has been lost in time. The imagination can’t even seem to conjure what it would look like because we hear so little about it. Yet, this large African country is currently experiencing a food crisis that is affecting 6 million people.

My first view of Niger was from the plane window as it began to make its descent towards the small tarmac of the capital city Niamey. Large swaths of beige in every possible shade expanded out from all sides, dotted by the occasional shrub. I arrived in Niamey with my colleague Guy Des Aulniers, Emergency Relief Programs Officer, and three journalists from Salt and Light Television. We are in Niger to visit projects being supported by Development and Peace as part of an emergency appeal for West Africa.

The situation is quite serious in neighbouring Mali as well and Niger also has to cope with Malian refugees. Guy shares his first impressions after a long day in a Malian refugee camp: “How do you describe such a situation? A temperature of 40 degrees, tents, 1 latrine for 50 people, 4 children with cholera, 25% of the children suffering from severe malnutrition. The camp is clean though, but has only been in place for 7 weeks now. Everything still needs to be built. Twenty-some people arrive every day. Everybody’s worried that a war will break out in Mali because if it does, the camp will overflow.”

Niger is suffering its fourth food crisis in seven years. In this current crisis, there are 6 million people in the country who are affected by food shortages. The population is now nearing the most difficult period when the stocks are depleted but the new harvest has not yet come in. The hope is that the projects put in place by Caritas Niger will help people through this lean season, and that a good rainy season will help to bring in plentiful crops in a few months. The rainy season has just begun here in Niger, but it is still too early to tell if the rains will be sufficient. The sky is grey, though, or “dirty” as they say here, as low-hanging clouds begin to spit a few drops here and there. Perhaps a sign of good things to come.