Not all the visas have been obtained yet. But, on the eve of Ash Wednesday, we can already announce that the national organizers of the Share Lent Campaign have invited five partners to the country so that they can tell us about the challenges they face. 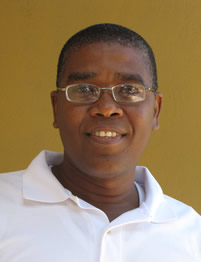 Two will be coming from Haiti: Ketty Paquiot, of  ITECA, and Antoine Verlaine Bien-Aimé (opposite) of Caritas Port-au-Prince. They will be covering the areas of Ottawa and Gatineau (Antoine Verlaine) as well as Montreal and it’s outskirts, and as far as the Laurentians (Ketty).

British Columbia will welcome Mam Sambath, Executive Director of  Development Partner in Action , from Cambodia. Brother Xavier Plassat, coordinator of the Pastoral Land Commission of Brazil will be staying in Toronto, Peterborough and Kingston. Finally, Father Edwin Gariguez, Secretary General of NASSA/Caritas Philippines, is expected in Nova-Scotia, Newfoundland and Labrador, as well as Prince-Edward-Island.

Development and Peace members are already busy organizing their field programs, which include conferences, homilies, official meetings and media interviews. Welcome among us!