There is no question that the extreme weather being caused by climate change is impacting the lives of small family farmers and their ability to grow food. Just a few weeks ago in the Philippines, 6,000 farmers blocked a portion of a main highway to demand government assistance after drought hit hundreds of thousands of hectares of farmland. The protest degenerated, farmers threw rocks and police responded with force. One farmer was killed, and dozens of others, both farmers and police officers, were wounded in the confrontation. “We ask for rice, instead they gave us bullets” said a farmer leader.

But is it a question of deteriorating conditions for growing food, or marginalizing the very people who can help solve our climate crisis and feed our planet: small family farmers?

The question of how best to ensure that people have enough to eat in the age of climate change was at the centre of a panel debate that was hosted by the newspaper the Hill Times in Ottawa, and which featured Josianne Gauthier, Development and Peace’s Director of In-Canada Programs.

The audience was invited to submit questions and vote for their favorite ones. Here are our answers to some of the most popular questions at the event.

You can watch the full event on CPAC here.

1. How can we make sure trade policies are developed with and do not impede on the livelihood of small family farmers?

Small family farmers produce 80% of food in the Global South, yet they are rarely at the table when trade policies are being negotiated by decision-makers. Not only do these policies ignore the needs of small family farmers, they actually put them at a serious disadvantage and make it harder for them to make a dignified living off the land. A good case in point is Colombia, where a free trade agreement with the United States prohibited Colombian peasants from saving their seeds. This meant that each year, they had to re-purchase seeds for their crops. Some peasants even had their harvests confiscated because they were accused of using illegal seeds. This doesn’t have to be the case, however, and in fact, peasants in Colombia organized a massive strike which forced the government to freeze this policy. Another example is in Brazil, a policy was introduced that requires that 30% of food served in schools is locally-sourced by small family farmers.  Food sovereignty, which is the respect of and control of local food production, should be a guiding principle in the development of all policies that touch on food security and agriculture.

2. Agro-ecology is often considered ‘backward’ or not modern, when it is actually leading edge. Why?

Small family farmers may not have technical degrees but they have thousands of years of local knowledge and traditional practices that have been honed over time and passed down. Small family farmers have been creating hybrid species for centuries and have long known that saving the best seeds from a year’s harvest will help to generate better harvests the following year and create resilience through the diversity of seeds. Unfortunately, our modern society tends to privilege technological solutions, but even Pope Francis in his encyclical Laudato Si’ reminds us that we cannot rely solely on technology to solve the climate crisis that we have ourselves created. We need a radical shift in our mindset away from infinite growth, and promoting agro-ecology is paramount to this. As the Pope mentions, we need a “bold cultural revolution,” but this requires a mass divestment of power, which will naturally be resisted by those who hold it.

3. The current government wants to see more ‘innovation’ in international development. What does innovation mean for small-scale farmers?

Naturally, there are technical innovations that can help small family farmers improve their harvests, particularly at a time when the weather has become so unpredictable due to climate change, and farmers can no longer rely on the rainy season or dry periods. These innovations can be as simple as the construction of rain capture systems and improved irrigation. We must also think, however, in terms of innovations in governance and economics. Fostering the creation of cooperatives, supporting social economy initiatives, helping to develop local marketplaces, ensuring women receive a salary for their significant contribution to local agricultural production – to name a few. In Haiti, several of our partners have begun to launch social economy projects. A chicken coop in Jacmel is creating local employment, especially for women, and is supplying the local market with locally-raised chickens that are less expensive than imported ones. We need to ensure that family farmers can earn a decent living and their work is valued. This change in perception would in and of itself be an innovation!

4. How can we offset the incentive for large-scale monoculture agriculture that has been created by a global food system focused on meeting the consumption demand of wealthy nations?

Education is critical. People are beginning to become increasingly aware of the link between their health and the food they eat. People want to know where their food comes from, how it was grown, etc. People are also beginning to realize the environmental impacts of our industrial food system and how it contributes heavily to carbon emissions. We need to continue to create awareness here in wealthy nations because a mass shift in our consumer habits is one of the most powerful actions we can take. Eating locally-sourced food, eating a vegetarian meal once day a week, these are all ways to react to and shape the existing system into one that is focused on feeding people over profits. We also need encourage our governments at all levels – municipal, provincial and federal – to put in place policies that support local production, that protect biodiversity, which is essential for building resilience in the face of climate change, and that recognize our responsibility as one of the largest carbon emitters by supporting countries in the Global South in adapting to the impacts of climate change.

5. What is the role of your organization in dealing with monoculture crop businesses that are taking much of the agricultural land from small-scale farmers?

Development and Peace has a long tradition of supporting peasant movements in the Global South and this is key to fighting landgrabs for the agribusiness. When people are organized and mobilized they can take collective action for change. These movements provide training and workshops to help small family farmers improve their yields. As national movements, they can bring attention to the plight of their members and lobby for change. In Paraguay, we are working with the Paraguayan Peasant Movement, which is helping to defend land rights. It is a struggle and we must recognize the courage of the individuals and groups who stand up to these large and powerful corporations. Sadly, there is a worrying increase in the violence committed against those who are defending land and environmental rights, as we saw with the brutal assassination of Berta Cáceres in Honduras. Our solidarity with these groups is more important than ever, precisely because we are at such a turning point in the future of our planet and humanity. As Development and Peace, we will continue to call on the solidarity of Canadians to support these peasant movements and to take action here in Canada for justice. 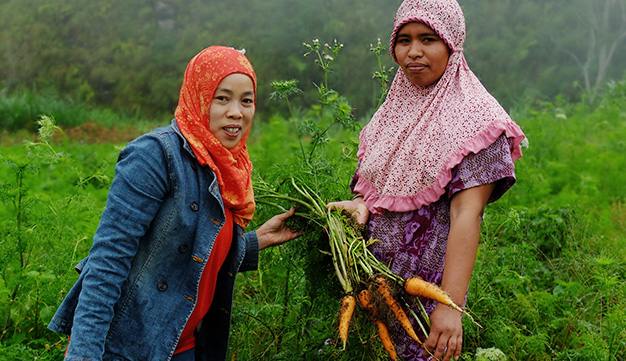 “I am in love with the land. I love to plant, nurture and harvest!”
Maria Dalva, a small family farmer in Brazil