For the past two years, after having followed a training course with KAIROS — of which Development and Peace – Caritas Canada is a member — I have the honour and privilege of being able to facilitate “the Blanket Exercise” in schools, universities, parishes and professional environments.

The KAIROS Blanket Exercise is a teaching tool that uses participatory popular education methodology to raise awareness of the nation-to-nation relationship between Indigenous and non-Indigenous peoples in Canada, and the colonization of the land we now call Canada. The exercise is designed to deepen understanding of the denial of Indigenous peoples’ nationhood throughout Canadian history, to make it clear that Indigenous peoples continue to exist as living communities and continue to have distinct rights and identities as nations, under the treaties and the Constitution, and to help participants explore and begin to acknowledge the continuing impact of colonization on Indigenous communities.

As a Métis woman from Manitoba, it is also a great opportunity for me to share the story of my people and a bit of my culture — by introducing the smudging ceremony, by playing my drum, and facilitating with an Indigenous woman elder. At the end of each exercise, I run a sharing circle with the participants. The testimonies that emerge demonstrate the extent to which the exercise is a powerful educational tool. Many see the link between the injustices experienced by Indigenous peoples in Canada and those in countries of the Global South — protection of Mother Earth, defenders of water, land grabbing, defenders against dams and oil pipelines — they experience the same struggles. 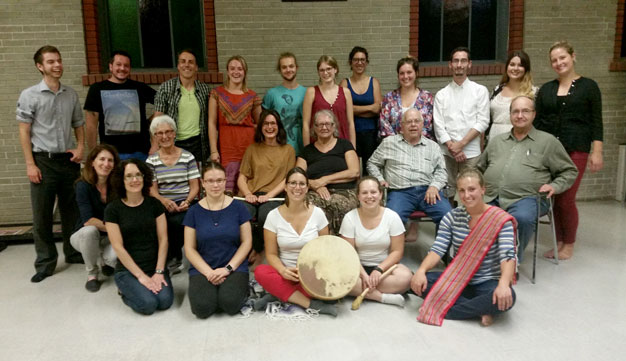 Chiefly as a result of the Truth and Reconciliation Commission, I feel there is a strong desire among many Canadians to educate themselves about the colonization of Canada and the impact of the residential schools. In January 2016, the Conseil jeunesse provincial approached me to train facilitators of the Blanket Exercise so it could be offered in the Francophone public schools. At that time, I was one of the few in Manitoba who could lead the exercise in French. It goes without saying that the schools haven’t stopped inviting us into their classrooms. What touches me is the commitment of young people to find concrete actions to be in solidarity with their Indigenous sisters and brothers.

You should know that many members of Development and Peace also want to participate in the Blanket Exercises and deepen their knowledge. In June 2015, the members had the opportunity to experience the exercise, in the language of their choice, at the Orientation Assembly.

To commemorate the first anniversary of the completion of the Truth and Reconciliation Commission, “Mass Blanket Exercises” took place all over Canada in June 2016. 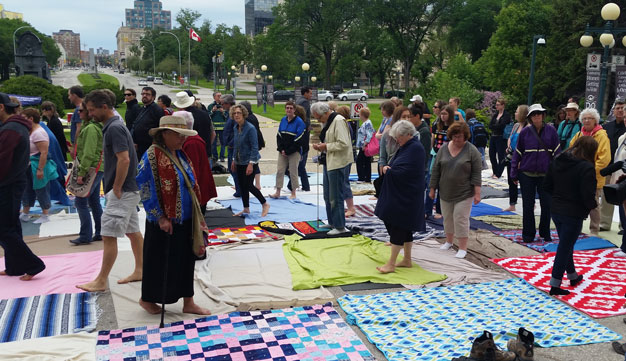 On June 4, in front of the Manitoba Legislative Building in Winnipeg, several members of Development and Peace joined with other organizations and churches to participate in this event. There were more than 200 of us there.

Starting in 2017, the Exercise will also be available on the list of activities for THINKfast. Many Development and Peace animators across Canada can lead this exercise in your area.

As part of the 50th anniversary of Development and Peace – Caritas Canada, we are organizing a conference to be held in March 2018 with the theme “Walking alongside our Indigenous Sisters and Brothers.” At the request of members, Development and Peace will seek to explore how it can demonstrate more solidarity with Indigenous communities in Canada.

On this National Day of Prayer in Solidarity with Indigenous Peoples, I offer tobacco to the Creator and a prayer for my Indigenous sisters and brothers of Canada, of the Americas and all over the world so that they might know that we are walking In solidarity with them and we will continue humbly on our path of reconciliation.