“The story of Africa has been documented by the hunter, and not by the leopard,” said Portuguese academic, Boaventura de Sousa, who has called for history to be retold from the perspective of the victims of colonialism, genocide and unbridled capitalism.

Development and Peace’s Program Officers for Latin America were in Quito, Ecuador, last week, to work with partners in supporting them in reconstructing key moments in the history of their own organizations. Once they have finished this project, they will be making an important contribution to telling the “leopard’s tale.”

Partners from Bolivia, Ecuador, Peru and Brazil spent time tracing pivotal historical events that tell the story of their respective communities, joining up the dots to produce a narrative that documents their own struggles and experiences, as told from the perspective of the poor and marginalized.  The analysis and interpretation involved will strengthen the organizations, allowing them to learn from the successes and failures of the past.

Contrary to conventional history, the process concentrates on key moments that acted as turning points in empowering these grassroots organizations, on the factors that helped advance their struggle, and obstacles encountered.  Built on a framework of objective facts, the process adds flesh to the bare bones by adding the subjective, the emotional significance of events and interprets their contribution to liberation.

The Brazilian Missionary Indigenous Council (CIMI) of Tocantins, in northern Brazil, identified such a moment when indigenous women, trying to protect their land, went into Supreme Federal Court, a highly intimidating place for these women, and spoke to the judges as though they were brothers:

– “Do you have a mother?  Would you kill your own mother?”

– “For us, the earth is our mother, who has fed us and given us shelter, and we cannot bear to see her defiled.”

The women’s frank and direct manner caught the judges off guard, and became a turning point in their struggle against industrial mega-projects, including hydro-electric dams, mining operations and agribusiness.

For the Regional Indigenous Council of Cauca, (CRIC), the visit of Pope John Paul II to Popayan, Colombia, in 1983, where he met with indigenous leaders, became a turning point in their struggle.  When an indigenous leader strayed from the lines of the planned presentations, a church official switched off the microphone. Pope John Paul quickly realized that he may be about to miss something important and told the church official, “Please, let our brother speak.”

The compassion of the Pope in the face of the local church’s attempt to silence the indigenous leader became a catalyst for the struggle of the CRIC, and the movement continued to build from strength to strength.

Partners involved in this exercise of historical reconstruction will be drawing their own organizational maps over the next few months, and they will present their conclusions in 2014.

It is expected that the finished product will represent a significant contribution to local history and enrich them in their community work. 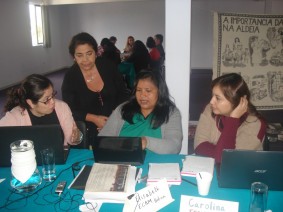 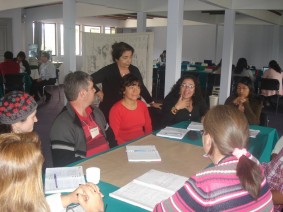