One month after the historic visit of Pope Francis to the Peruvian Amazon, the Spanish-born Bishop of Puerto Maldonado, David Martinez Aguirre, is still running on the energy high.

“Just the news that Pope Francis was going to come to Puerto Maldonado was in and of itself a sensation,” says Bishop Martinez, who works closely with Development and Peace partner CEAS (Episcopal Commission for Social Action.)  This capital city of Peru’s easternmost province of Madre de Dios – a remote swathe of Amazon forest on the border with Bolivia and Brazil – has been described as la periferia de las periferias (the edge of the edge).  Its population of 348,000 includes 29,000 Indigenous peoples of 22 different groups, as well as other settlers and immigrants. The Indigenous who live here are descendants of the slaves who were forced to toil on the rubber plantations of the 19th century.

“The Pope’s visit gave some much needed visibility to the Indigenous peoples here and this region of the Amazon,” said Bishop Martinez.  The visit of the Pope to Puerto Maldonado was a curtain raiser for the Vatican’s Synod on the Pan Amazonian region, to be held in Rome in October 2019.

Today, it is no longer rubber that enslaves the Indigenous peoples of the Peruvian Amazon, but gold, which is drawing prospectors to scramble to exploit the artisanal mines. The gold rush has brought violent clashes as different groups fight for control of the most lucrative ore seams, a human trafficking problem, as young girls are tricked into working in the prostibares (prostitution bars) of the illegal mining centres, and serious environmental degradation.

The lack of coordination between different government departments has only compounded the situation.  Church officials say that lands are often the subject of double or even triple concessions, given out by different central and regional government bodies, leaving communities in a perpetual state of uncertainty as to who is going to show up to claim their land.  A publication released by several Church organizations including CEAS refers to 2,821 mining concessions recorded in July 2015, throughout the department.  Yet 20% of these are on Indigenous peoples’ lands, 16% are on forestry concessions, a staggering 70% are on fossil fuel sites and a further 6% are on lands protected for eco-tourism and conservation.

Added to this chaos are the illegal mining and logging activities which destroy the forest and poison wildlife.  La Pampa, 100 km west of Puerto Maldonado, is the local centre of illegal mining, where once virgin forest has been replaced by sand-covered exhausted mine seams. Its main drag is lined with bars where prostitutes stand waiting, and the road is ankle deep in plastic and Styrofoam trash. Yet environmental authorities rarely catch those responsible for damaging the environment, instead fining and arresting the Indigenous and poor who are trying to survive.

Preparations for a Synod on the Amazon underway

Arazaire, a community of 110 Harakmbut people, 140 km west of Puerto Maldonado, is an example of this dynamic.  Although the Harakmbut possess land titles, the state has given out 18 mining concessions on the same lands.  Currently, three community members are in detention for failing to pay fines for environmental damage caused by illegal loggers.

“How can we survive if we cannot fish or hunt?” asks community leader Mercedes Tije.  “Sometimes we have nothing but plantains to eat.” 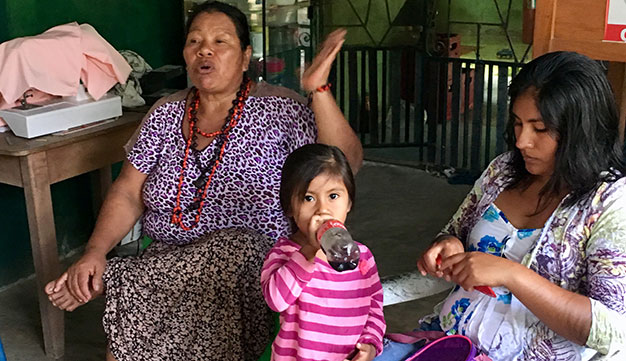 The extreme poverty in which people live is visible here.  There is no drinking water and children drink soda from bottles; neither is there a school nor health facilities.

Pope Francis spoke to the plight of this community during his January 19 visit to Puerto Maldonado.

“The native Amazonian peoples have probably never been so threatened on their own lands as they are at present,” the pope stated in a meeting with representatives of several groups of Indigenous peoples.

“There is pressure being exerted by great business interests that want to lay hands on its petroleum, gas, wood, gold and forms of agro-industrial monocultivation. On the other hand, its lands are being threatened by the distortion of certain policies aimed at the ‘conservation’ of nature without taking into account the men and women, specifically you, my Amazonian brothers and sisters, who inhabit it.”

The Pope referred to conservation schemes which cause Indigenous peoples to lose access to their land and natural resources.

Bishop Martinez echoed the concerns of Pope Francis, stating that Indigenous peoples’ methods of hunting are small scale and for survival, and are thus sustainable.

The Bishop hopes that these issues will be considered at the October 2019 Synod on the Pan Amazonian region.  The Synod is a high-level Vatican meeting in which bishops will come together in Rome to discuss the problems facing the region and identify possible solutions.  In March 2018, Pope Francis appointed Cardinal Claudio Hummes of Brazil, president of Development and Peace partner REPAM (Ecumenical Network on the Pan Amazon region) to direct the 18-person council of the Synod. Other members include Ghanaian Cardinal Peter Turkson, prefect of the Dicastery for Promoting Integral Human Development, 13 bishops, a nun and the executive director of REPAM, Mauricio Lopez.

The Amazon rainforest spreads across parts of Brazil, Ecuador, Venezuela, Suriname, Peru, Colombia, Bolivia, Guyana and French Guiana, and the churches of these countries are all members of REPAM.  Each participating member will gather the concerns of churches in its country and transmit them to the Synod process.

“We hope that the synod will render the Amazon peoples less invisible and raise awareness that the Amazon is more than the lungs of the planet, but also a space that we have to protect, and that, as a Church, we must strengthen the participation of the Amazonian peoples,” said Bishop Martinez. 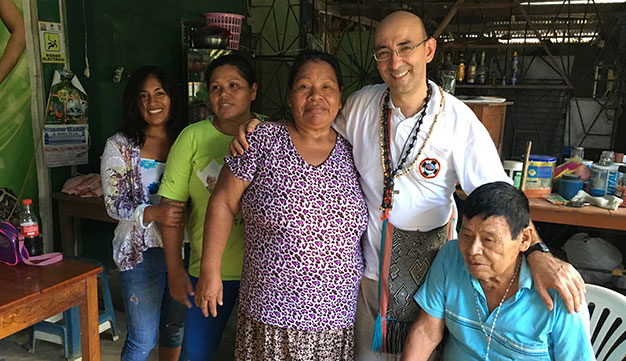