During my short visit to El Salvador for the beatification of Oscar Romero, one of the things that left the deepest impression on me was meeting people who had known Romero personally, or whose work had been affected by him. Unsurprisingly, several of these people work for Caritas El Salvador.

During the beatification Mass on Saturday, offerings were presented, including a basket of local produce prepared by Caritas El Salvador. To present the offering, the organisation chose Jorge Alberto Fernandez from the diocese of Santiago de María where Romero had briefly been bishop. During this period he witnessed the suffering of the country’s landless poor which, in his own words, led him to change his attitude. Mr Fernandez was Msgr Romero’s chauffeur during the last years of his life. “I must be the person who knew Msgr Romero best,” he tells me, “having spent so much time with him. I shared his sorrows and his wrath. Oh yes, he could get angry! But above all he was extremely generous. What little he had he gave to people who needed it more than he did. If someone required help, he gave it regardless of whether the person was from the left or the right. What counted for him was the human being inside everyone.” 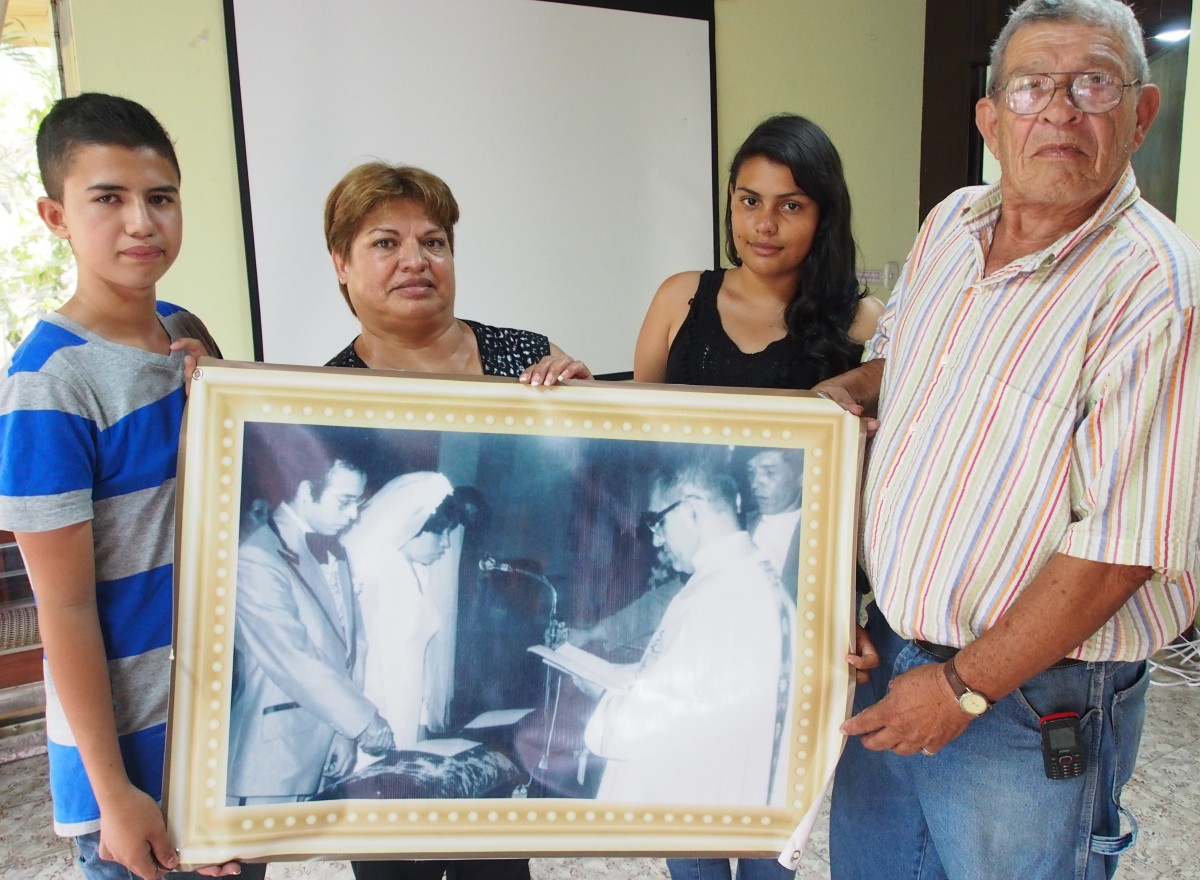 Jorge Alberto Hernandez, Romero’s chauffeur, with his wife and grand-children, holding a photo in which he stands at Romero’s side (top right corner).

Listening to Msgr Romero’s biography on Saturday I learnt that he had been a shy child. Apparently he stayed that way, despite his important office as Archbishop of San Salvador. Hilda Luz Trejo, coordinator of Caritas El Salvador’s position on human rights, justice, and peace and reconcilation, got to know him when she was a novice in a religious order. “He regularly visited the congregation house because the mother superior was a friend of his. He was a modest and shy man. He didn’t look you in the eye, but at the lectern he was another person. During his homilies he turned into a prophet. He confided to me that he prepared his homilies to last 15 minutes, but when he gave them he heard an inner voice that told him to continue. I’ll never forget his tears on the anniversary of the murder of his friend Rutilio Grande. He cried a lot and said: ‘I owe my conversion to this man.’

“His poverty also left a deep impression on me. One day, when he was wearing his black cassock, we went to his house so that he could change. Noting my astonishment when he came out wearing the same cassock, he explained to me that his other cassock was wet because it had been washed. Can you believe that he only had two?”

For Hilda, Romero is a model of how to work with the poor. It’s a great challenge to respond to the new faces of violence, the landless farmers and the young people who are killing each other. If Romero were still here, he would remind us of our daily commitment to be faithful to the Gospel and to respond to injustices. “Today,” she says, “once again we must help people to organise themselves because the power structures are still the same.” 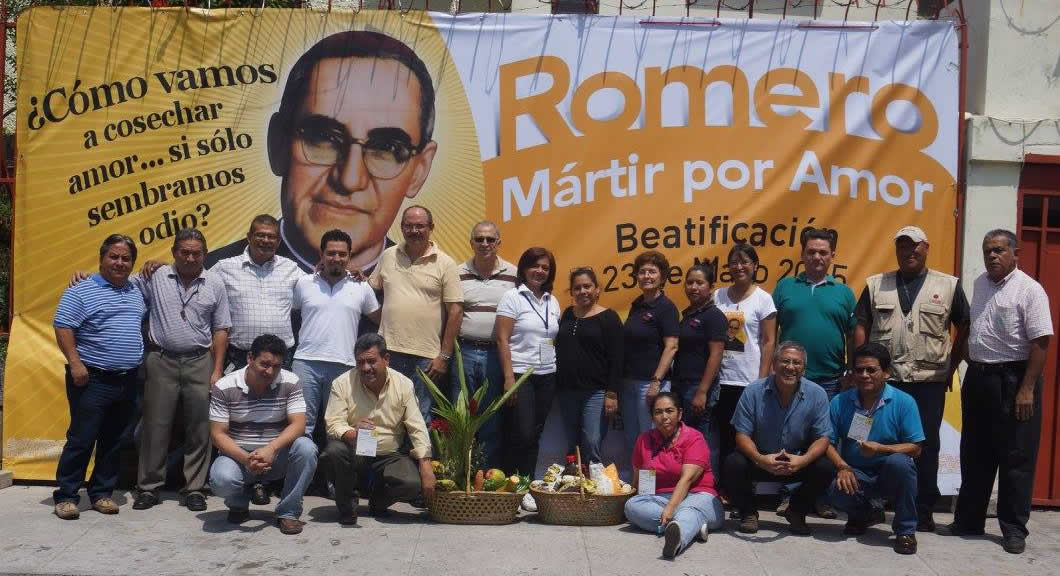 The Caritas El Salvador team. Hilda Luz Trejo is in the front, wearing a pink t-shirt.

Msgr Samuel Elías Bolaño, vice-president of Caritas El Salvador didn’t have the opportunity to get to know Romero, who died on the very day they were supposed to meet. “I was at the seminary when he became archbishop. I was studying in Guatemala and we listened to his words and admired him very much. We followed everything that was published about him. He was the man of the hour when he became archbishop at the time of the great confrontation between the left and the right in El Salvador. If Romero were still alive, he would talk about the violence that destroys us and would appeal to us to convert, just like he did, and seek solutions to the causes of this violence.”

”Msgr Romero’s contribution has enabled Caritas to become today what Pope Francis called: ‘the caress of the Church to its people’. However, I believe we haven’t taken advantage of Msgr Romero’s contribution and legacy. Now we are faced with the challenge of raising awareness of him here in El Salvador, because he’s better known abroad as a great human rights campaigner,” Antonio Baños, the director of Caritas El Salvador, told me. 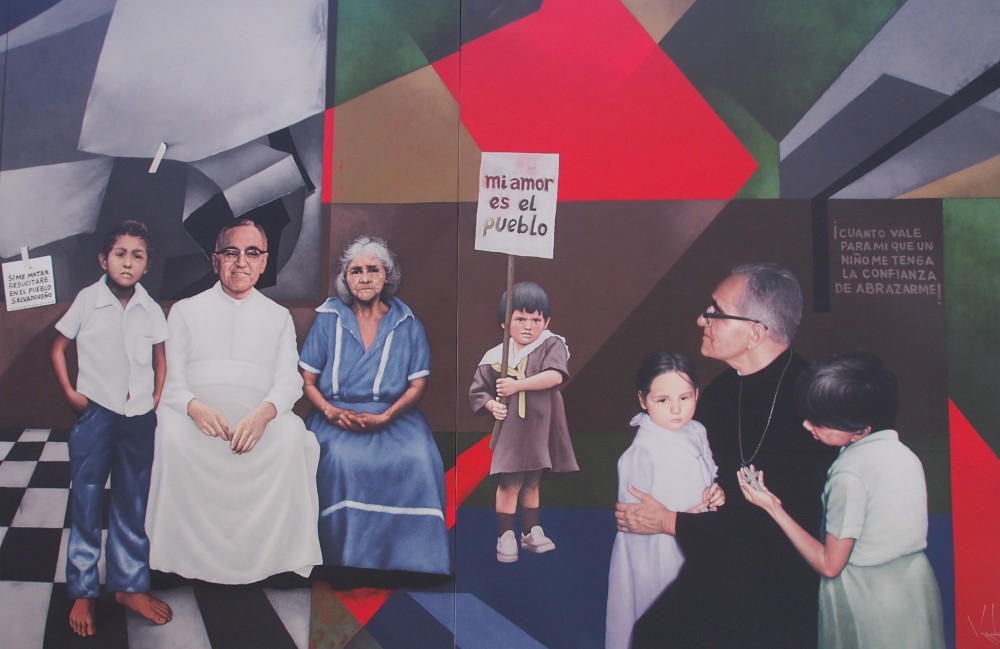 A painting that hangs in the chapel where Romero was killed. It reads : “my love is the people” and “It means a lot to me that a child has the trust to give me a hug!”.

I would like to take advantage of this opportunity to thank my colleagues at Caritas El Salvador who gave me such a warm welcome and facilitated my work. Gracias! A special thank you to Ilse, Ceci and Fabio.