Oscar Romero was killed for denouncing violence and defending the poor. Archbishop of San Salvador from 1977 to 1980, he was murdered while celebrating Mass. In the decade that followed his death, more than 60,000 Salvadorans died in the civil war.

Romero is already considered a saint by Salvadorans. On Saturday 23 May however, he will take the next step on the path to official sainthood during a beatification ceremony celebrated by Cardinal Angelo Amato, S.D.B., the Prefect of the Congregation for the Causes of Saints, in the capital San Salvador. 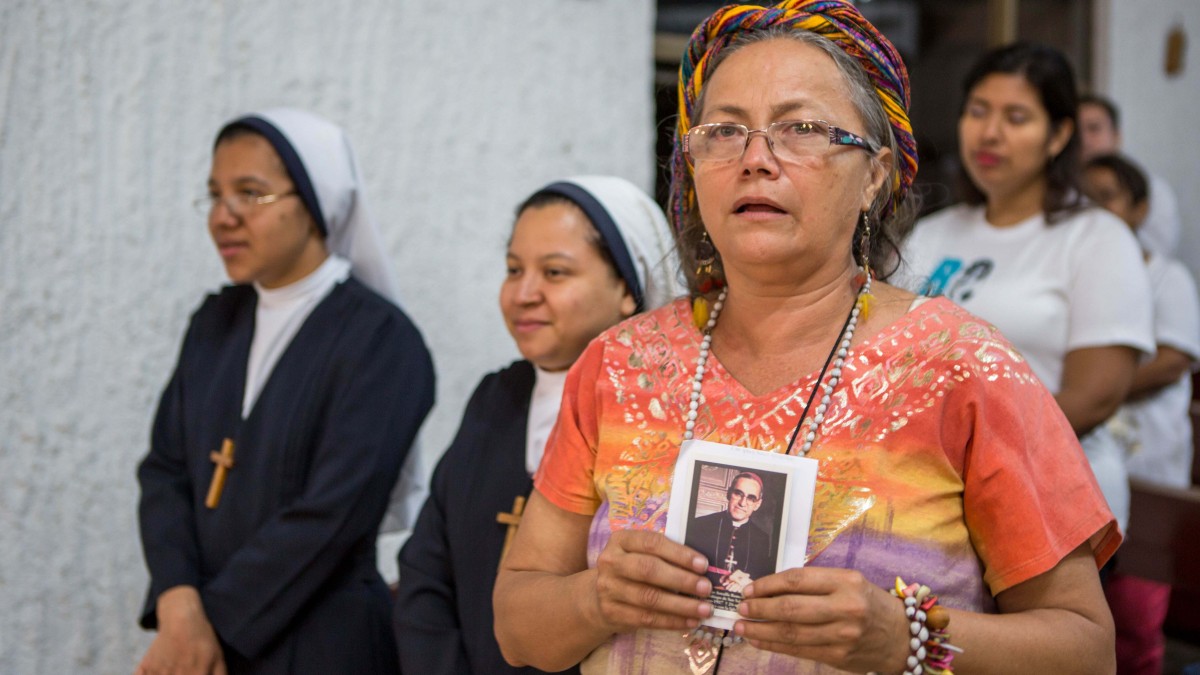 When I got off the plane at the ‘Monseñor Óscar Arnulfo Romero International Airport’ in San Salvador, I was greeted by a poster of Romero. They’re everywhere in the city, reminding us of what he gave up his life for: “Let my blood be a seed of freedom and the sign that hope will soon be reality.” 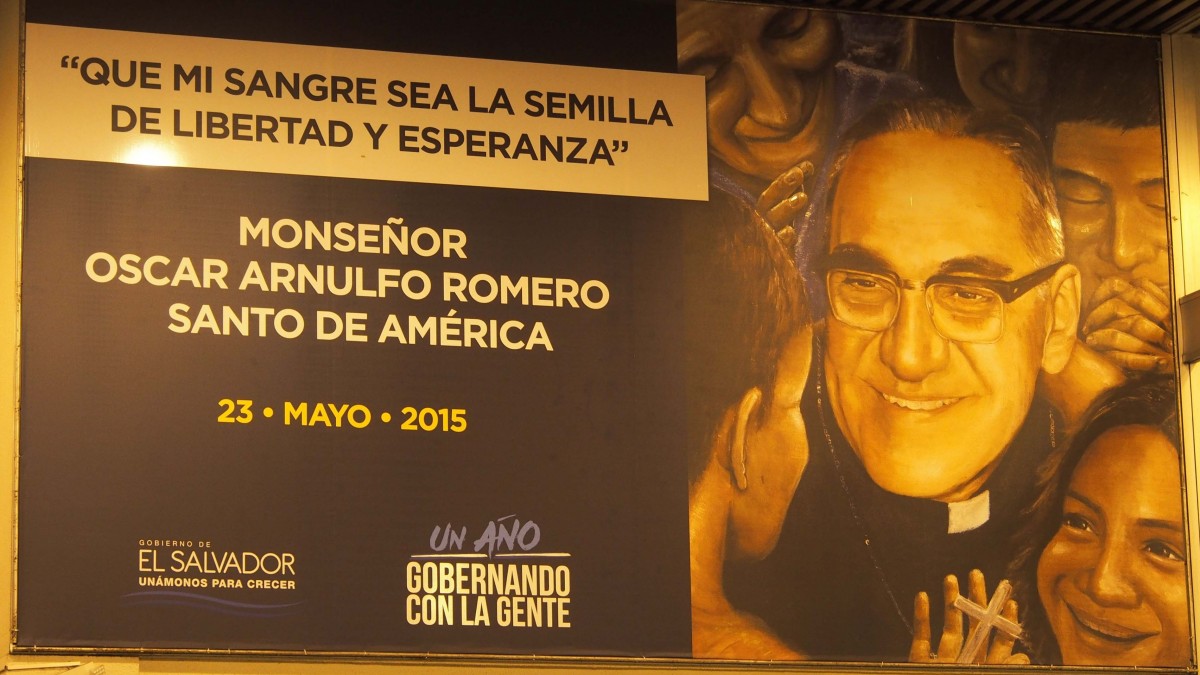 Pope Francis announced two months ago that the beatification would take place, marking the 35th anniversary of Romero’s death. With only a short time, organisers have been working hard to prepare for the event. Over quarter of a million Salvadorans and international guests are expected.

An altar has been built and tents put up at the Plaza El Salvador del Mundo to welcome the cardinals, bishops, priests, heads of state, dignitaries, farmers, indigenous people and working people. The square can only fit 6200 people so the surrounding streets will be closed and giant screens put up for the rest to watch.

There I met Mario Calderon, who came to see the place but will watch the ceremony on TV to miss the crowds. This great-grandfather knows all the important places linked to Romero. “Without him, it would have been much worse,” he said. 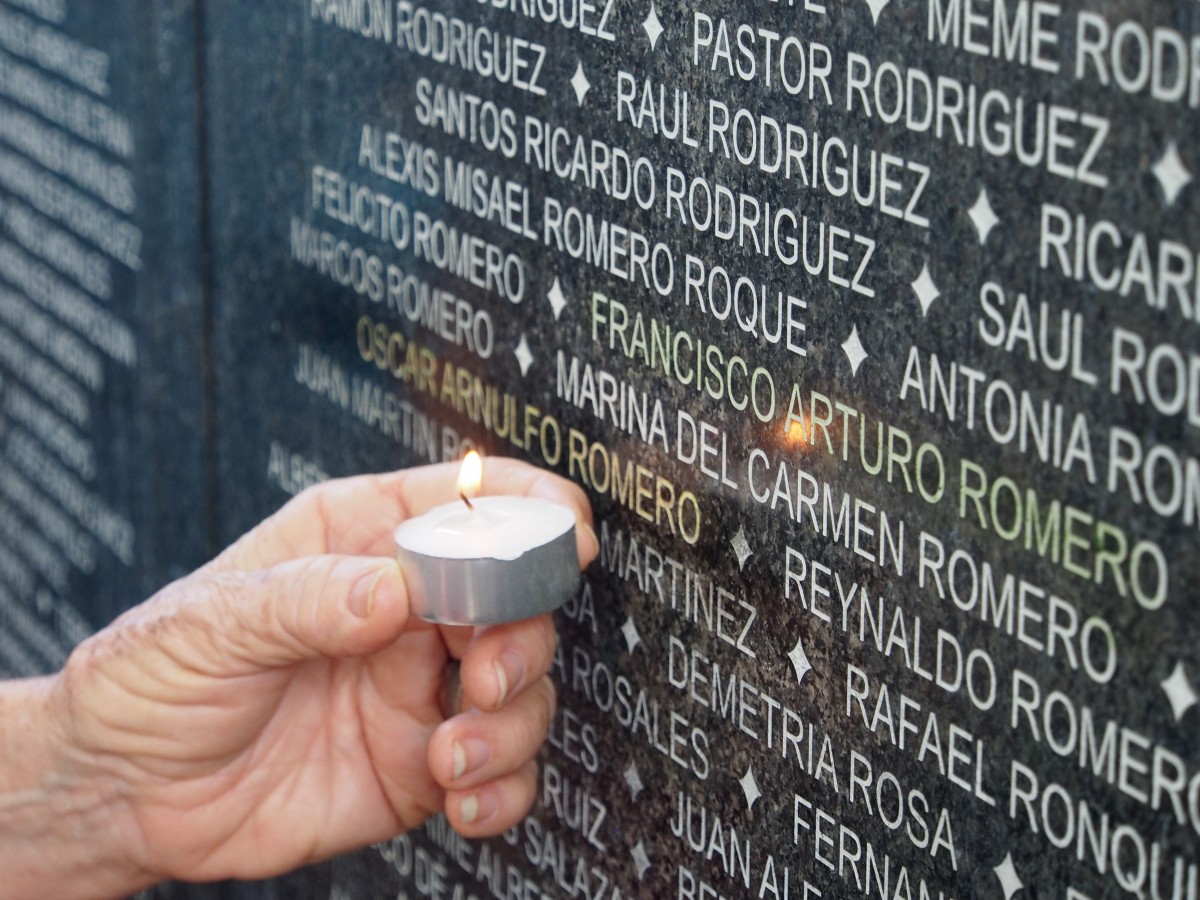 Oscar Romero’s name is one of the tens of thousands on the Monument to Memory and Truth in San Salavador, a symbol to the dead and disappeared.

The emotion is tangible at Romero’s tomb in the crypt of San Salavador Cathedral. A blind guitarist sings in memory of Romero to the people kneeling there.

One of those I spoke with was Pablo Andreas. He was born the year Oscar Romero was assassinated. He hopes to come to the beatification with his wife and 11 year old son, who he is teaching what Oscar Romero means for El Salvador.

When Pablo Andreas was a boy himself, his grandmother would tell stories of the archbishop. She was at the funeral of Romero at the cathedral with around 250,000 other people. Sharp shooters and assailants with bombs attacked the mourners, spreading panic and killing scores.

“But the people protected his body to the place where it would be buried because he had protected them during his life time and they could not abandon him.”