This year, Share Lent, the annual education and fundraising campaign of Development and Peace, was marked by some disappointing news.

Around mid-Lent, Development and Peace signed a new agreement with CIDA, which only provides a third of the financing for a programming proposal that was submitted by the organization. The proposal asked for $49.2 million over five years, however, CIDA decided to provide $14.5 million. This means, that in order to maintain our current programming in the Global South and in the North, we need to make up a gap of $5 million annually. Faced with this situation, many of you answered the call of solidarity launched by Development and Peace. 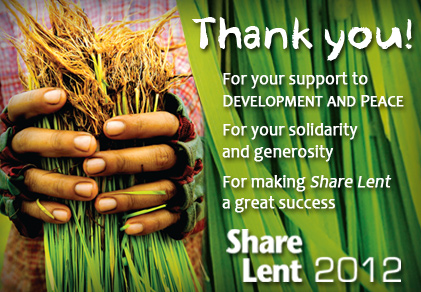 Now that Share Lent is over, we want express our sincere gratitude to all those who contributed to this campaign.

Thank you to all our members who organized fundraising activities, soup and bun dinners, speaking engagements and other Lenten events. Thank you also to all those who mobilized so quickly after hearing the news of our reduced financing from CIDA by organizing a Good Friday Fast on April 6th, which collected over $2,000 online and more from participants across the country, and by initiating the One Dollar One World campaign, an excellent way to inform MPs of our disappointment with CIDA’s decision.

Thank you to the team at Development and Peace, particularly the animation staff, who coordinated several activities during Lent and organized the visits and speaking engagements of our five partners from the Global South throughout the country.

Never has Development and Peace received so many online donations for Lent: over $120,000! This far surpasses our initial objective of $75,000! Thank you to all our donors for this!

More than 60 people participated in the online Give it Up campaign and collected $12,450. We want to congratulate those who raised over $1,000 via their personal fundraising page:  Kaitlyn Duthie-Kannikkatt, a member of the National Council who fasted for a week, Sophie Laughrea, Elizabeth Morelli and Mayalène Lavigne-Martel. Thank you to all those who participated in the Give it Up campaign!

Over 100 THINKfast events were organized across the country, which helped to raise over $12,000 online (and we haven’t finished counting offline donations!) We want to congratulate St. Thomas Aquinas High School in North Vancouver, which raised $14,000 through its THINKfast. Thank you to all the students for their efforts!

We still don’t know the total of the Solidarity Sunday collection that took place on the fifth Sunday of Lent, but we know that there were many who showed their solidarity and generosity towards Development and Peace and our partners in the Global South. This was greatly encouraged by Bishops and clergy from across the country, who contributed significantly to making the Solidarity Sunday collection a success. Thank you for such inspirational support!

While awaiting the final results of the campaign, we want to say THANK YOU a million times over to everyone who made it possible!