On June 2, the Truth and Reconciliation Commission of Canada released its final report (read the executive summary) before an audience filled with expectation and emotion. After having collected 7,000 testimonies over a period of six years from victims and persons in charge of Indian Residential Schools, the Commission concluded that these institutions were the key element in a policy of “cultural genocide” directed against the First Nations of Canada and designed to eliminate any form of distinct Aboriginal legal, social, cultural or religious entity. Upon closing their work, the commissioners stated that only an important reengagement on the part of the State, combined with a broad public dialogue, can open up a way toward genuine reconciliation and equal opportunities for Aboriginal populations. A list of 94 recommendations was drawn up to guide the process.

It is important to know that between the mid 1800s and 1996, over 150,000 Aboriginal children in Canada were forcibly taken away from their communities and placed in residential schools mandated by the Canadian government and administered by various religious entities. Separated from their families, forbidden to speak their mother tongue or to live according to their culture, the large majority of children who attended these schools were victims of grave negligence and abuse. Over 3,000 of them died there. The repercussions of the harm they suffered are still felt today in a number of ways by generations of survivors, their families, and their communities. Established in 2007 on the heels of the Indian Residential Schools Settlement Agreement, the Truth and Reconciliation Commission (TRC) was mandated to investigate the abuses committed in these residential schools in order to “contribute to truth, healing and reconciliation.” 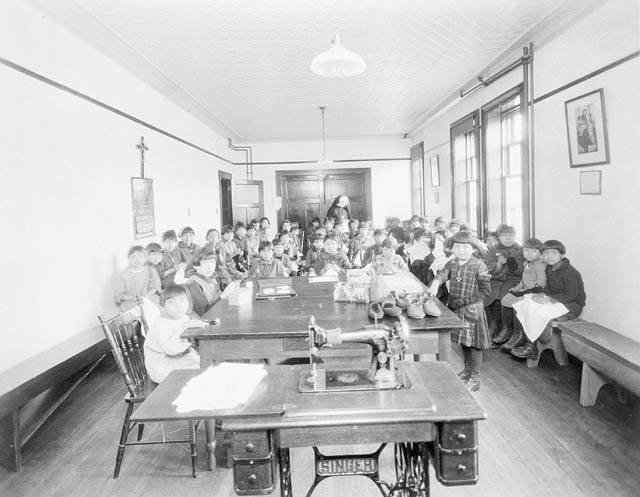 Through its involvement in the Kairos ecumenical network, Development and Peace has followed the unfolding of events around the closure of the Commission’s activities. As members of the network, we were able to witness this defining moment in our history, where the first markers for a much needed and long overdue reconciliation process were set. Even though wrongs have been acknowledged and some apologies have been presented by the various parties concerned, a colossal effort is still required in order to achieve genuine reconciliation and healing of the harm inflicted on former residential school attendees, their families and communities.

The legacy of residential schools and the underlying assimilation policy are still present indeed. In Canada, inequalities between Aboriginals and non-Aboriginals are alarming and multi- dimensional. They are reflected as much in the poverty afflicting half of Canada’s Aboriginal children, as in the overrepresentation of First Nations youth in the youth protection and prison systems. A poor knowledge of our common history, which obscures both the harm caused to Aboriginal populations by colonization and the contribution of these communities to our society, provides fertile ground for prejudice, racism and discrimination. This is without mentioning the struggles for access to land and natural resources that Aboriginal communities affected by the development of energy and economic projects continue to wage.

We are well aware of these struggles similarly affecting communities of the South, whom we support through our programs and advocacy work. Among the affected communities, indigenous populations are often the first ones to suffer the impact of issues at stake in this battle, such as access to land and the overexploitation of natural resources.

The findings of the Truth and Reconciliation Commission remind us that poverty and injustice are also to be found in our own backyard.  As we begin an in-depth examination of our organization’s mandate at the Development and Peace Orientation Assembly, various questions arise. As a movement working in defense of social justice and development, how should we envisage our role in relation to the fight for dignity and rights playing out in our country and affecting us directly as Canadians? In what way could we better connect common struggles that are being fought both in the North and the South? What is the true meaning of North-South boundaries, when injustice, poverty and the issues that induce them increasingly transcend these demarcation lines?

In its 94 recommendations, the Commission presents us with various avenues for engagement in order to pave a pathway to reconciliation for us to follow. One of them is to see to Canada’s adoption and implementation of the United Nations Declaration on the Rights of Indigenous Peoples, in order to create bonds of solidarity with First Nations from both North and South. Another inspiring possibility also opens up for us. In the context of the launch of our climate justice campaign, the close and harmonious relationship that indigenous peoples have been able to establish with nature can be a great source of inspiration as we try to restore this balance, thrown off kilter by our overconsumption and overexploitation of the earth’s resources. Beyond supporting some of the Commission’s recommendations, this might be an opportunity to take a first step towards reconciliation.