Six young people from Quebec are currently completing an introduction to international solidarity internship in Ecuador as part of the Québec sans frontières (Quebec without borders, or QSF) program. They are supporting a Development and Peace partner, the Asociación Latinoamericana de Educación y Comunicación Popular (Latin American popular education and communication association, or ALER).

As part of their project, the interns also support various member organizations of ALER established in Quito. ALER’s mission is to foster the emergence of educational radio communication and to work with other social actors for the democratization of communications, sustainable human development, and the building of societies marked by justice, equity, and democracy.

The group is sharing their experiences during their stay. Here Yasmine tells us about her experience at the Casa de la Cultura (culture house).

From the window of my office, I can see the Casa de la Cultura, this oval monster with mirror scales that changes color according to the moods of the sky. I can see the comings and goings of its many employees: anxious artists monitoring the frequency of visits to their exhibits; folk dancers leaving the theatre after their performances; and moviegoers discussing a film they have just seen at the cinematheque. I feel like James Stewart in Rear Window, except that, instead of being witness to a morbid event, every day I witness a display of the richness and diversity of this country, so small in size but so great in terms of its culture.

Last week at work I was asked to come up with ideas for an advertising spot for the new Casa de la Cultura FM radio station, Cultura FM 100.9. I was delighted to learn that one of my ideas had been chosen by my young colleagues in the audiovisual department and that the next day we were expected to take the camera and mike and turn thought into deed. 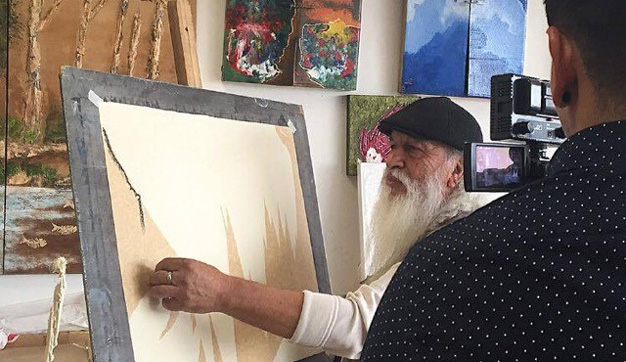 Bryan filming a painter at the Casa de la Cultura

The next day, Bryan, Omar, and I went to the Casa de la Cultura to ask various members (artists, employees, and students) to take part in our advertising spot project. The idea was to film a dozen people of different genders, ages, and ethnicities, getting each of them to say a word that refers to culture. Truth be told, the words were not chosen arbitrarily: they were all carefully selected based on their definitions in the Organic Law on Culture.

After a couple hours spent editing, the end result of our work is rather understated, unpretentious, but effective. Here’s one of the three videos we made: