Today, the presidents of continental groupings of national episcopal conferences representing all regions of the world issued a compelling appeal to the negotiating parties and heads of state that will be in attendance at the United Nations COP21 climate conference in Paris to work for the approval of a fair, legally binding and truly transformational climate agreement. Most Rev. David Douglas Crosby, Bishop of Hamilton and President of the Canadian Conference of Catholic Bishops signed on behalf of Catholic leaders in Canada.

The statement is a powerful call to put the common good ahead of national interests and to protect our common home and all its inhabitants. The appeal underpins the importance of Pope Francis’ encyclical Laudato Si. The signatories “join the Holy Father in pleading for a major breakthrough in Paris, for a comprehensive and transformational agreement supported by all.”

The agreement, according to the signatories, should limit global temperature increases to avoid catastrophic climatic impacts, especially on the most vulnerable communities. Based on scientific evidence, faith leaders recognize that excessive reliance on fossil fuels is primarily responsible for accelerated climate change, and they call not only for a “drastic reduction in the emission of carbon dioxide and other toxic gases,” but also for ending the fossil fuel era.

Putting forward a ten-point proposal the appeal draws on the concrete experience of people across continents, and links climate change to social injustice and the social exclusion of the poorest and most vulnerable of our citizens. The Church is witness to how climate change is affecting vulnerable communities and people, and signatories therefore “call for social justice to be placed centre stage.”

The appeal was written in collaboration with our Catholic networks CIDSE (international alliance of Catholic development agencies) and Caritas Internationalis, two networks that Development and Peace belongs to, and with the sponsorship of the Pontifical Council for Justice and Peace. 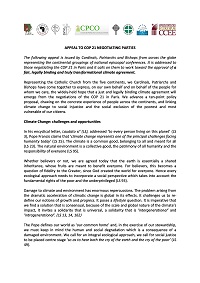