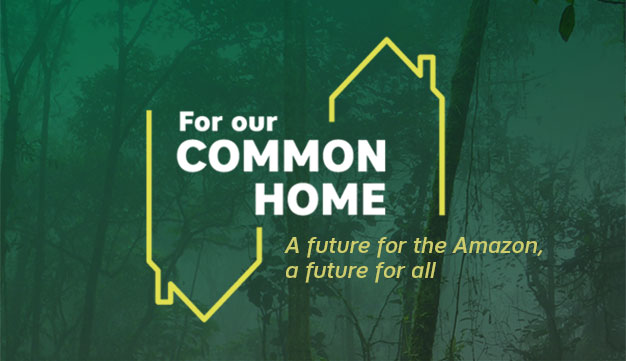 Development and Peace – Caritas Canada announces the launch of For our Common Home, its new two-year campaign focussed on ecological justice. The theme for the first year of the campaign — A future for the Amazon, a future for all — could not be timelier.

“While raging fires draw the world’s eyes to the Amazon rainforest, our campaign shows Canadians what’s behind the headlines — policies that privilege profit over people, our demand for resources that drives those policies, and the traditional and Indigenous people who resist the destruction of their territories and ways of life,” said Serge Langlois, executive director of Development and Peace.

The campaign reflects the concerns that have led Pope Francis to convene a Special Assembly of the Synod of Bishops for the Pan-Amazon Region at the Vatican in October 2019 to “find new ways of developing the Amazonian face of the Church and to respond to situations of injustice in the region.”

The For our Common Home campaign is being kicked off today with a webinar in which Development and Peace’s members will reflect on the spiritual imperative of preserving the Amazon and learn about the plight and fight of Amazonian peoples in present-day Brazil.

Over the coming months, Development and Peace’s members will conduct workshops in churches and schools in communities across Canada. They will raise awareness about the ecological significance of the Amazon rainforest, the threats it faces, how Western consumerism exacerbates those threats and the critical role that increasingly imperilled Indigenous and traditional peoples play in protecting the forest.

Canadians will be invited to sign a Solidarity Letter addressed to two Brazilian communities, the seringueiros (artisanal rubber tappers) of Machadinho d’Oeste and the Mura people of Manaus, whose lands, lifestyles and livelihoods are threatened, respectively, by illegal logging and a Canadian-funded mine. The goal is to get at least 65,000 signatures, one for each Amazonian tree and vertebrate species.

In addition to being delivered to the addressees, the signed letters will be leveraged for advocacy. Citing them, we will write to the Canadian and Brazilian governments and implicated companies to demand better protection for the forest and its peoples; better compliance with more stringent regulation; and due regard for ecological concerns in the negotiation of trade deals. We will also facilitate meetings with Members of Parliament at which Canadians will further press these demands.

Inspired by the student climate strikes to preserve the planet for future generations, Canadians will be invited to take an online pledge to make a lifestyle change, like reducing meat consumption or using public transport, for the sake of the environment.

“Canadians always respond enthusiastically to Development and Peace’s campaigns,” Langlois said, predicting, “This time will be no different. People will join us in huge numbers because they will understand that this is not a campaign about a faraway forest. It is an existential struggle For our Common Home.”

For more information about the For our Common Home campaign, visit devp.org/forourcommonhome.

At a time when environmental concerns are at the top of the minds of most citizens and the Amazon rainforest is literally going up in flames, For our Common Home helps Canadians understand and address a global problem. As such, it represents a powerful story of hope and people power.