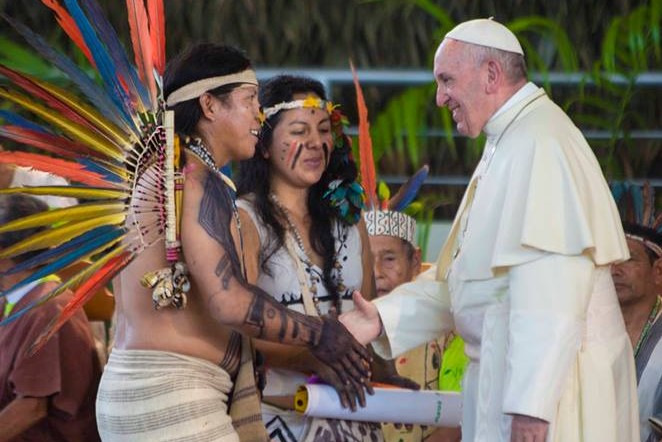 Development and Peace – Caritas Canada’s partners are playing a critical role at the Special Assembly of the Synod of Bishops for the Pan-Amazon Region being held at the Vatican from October 6 to 27, 2019. At the Synod, clergy, Indigenous representatives and community organizations are deliberating how the church can arrest and alleviate the Amazon region’s many pressing ecological and social problems.

As executive director Serge Langlois, notes, “Many church leaders who have been close allies of Development and Peace are now at the core of this Pan-Amazonian Synod.” They include the president of delegates, Cardinal Pedro Barreto (Peru); theological consultant, Sr. Mary John Mananzan (Philippines); special secretary, Bishop David Martinez (Peru); and member elected by the Union of Superiors General, Fr. Dario Bossi (Brazil). Also participating in seminars and workshops that scores of community and faith-based organizations are convening around the Synod will be Development and Peace’s communications director, Kelly Di Domenico, and Latin America programs officer, Mary Durran.

The Synod is inspired by and a manifestation of the 2015 encyclical, Laudato Si’, in which Pope Francis bemoaned the social and ecological destruction wrought by reckless consumerism and development and made the spiritual case for a more responsible relationship with the environment. In drafting the encyclical, the Holy Father had sought the insights of several Development and Peace partners into the tribulations of vulnerable communities in the Amazon basin. These included environmental degradation, land-grabbing, human rights abuses and other social issues.

These esteemed organizations helped the Vatican understand and incorporate into the Synod’s scope not only the injustices faced by the Amazonian poor but also the role that Western consumers play in their suffering by driving the demand for the oil, minerals, lumber, meat, soya and other commodities in whose pursuit profiteers usurp land, destroy jungles, displace communities and even commit murder.

To offset this bleakness, our partners also ensured that the Synod recognized and drew upon the strength and optimism of the Amazon’s Indigenous and traditional peoples who, for centuries, have been good custodians of the forests and who, through creative collaborative action, resist oppression, stand up to hostile governments, defend their rights and preserve their lands, waterways and jungles.

The Synod is thus informed by the practical, emotional and spiritual insights of people at the frontlines of the ecological crisis. As such, although it is nominally focussed on the Pan-Amazon Region, the Synod engages in issues of global concern that are especially pertinent in the ecological hotspots of the Congo, Indonesia and Canada where Indigenous and impoverished communities are bearing the brunt of climate change and extractivism- and consumerism-driven economics.

“We are at once humbled by and proud of our role in the Pan-Amazonian Synod,” Langlois said, “We helped our partners bring the testimonies of the Amazon’s resident defenders to the Vatican. Thanks to them, the Synod is responding to ‘the cry of the poor and the cry of the earth,’ as Pope Francis wanted it to.” He added, “Our work in the lead-up to the Synod has also inspired our ongoing For our Common Home campaign, which engages Canadians in protecting the threatened communities who are protecting the Amazon rainforest.”